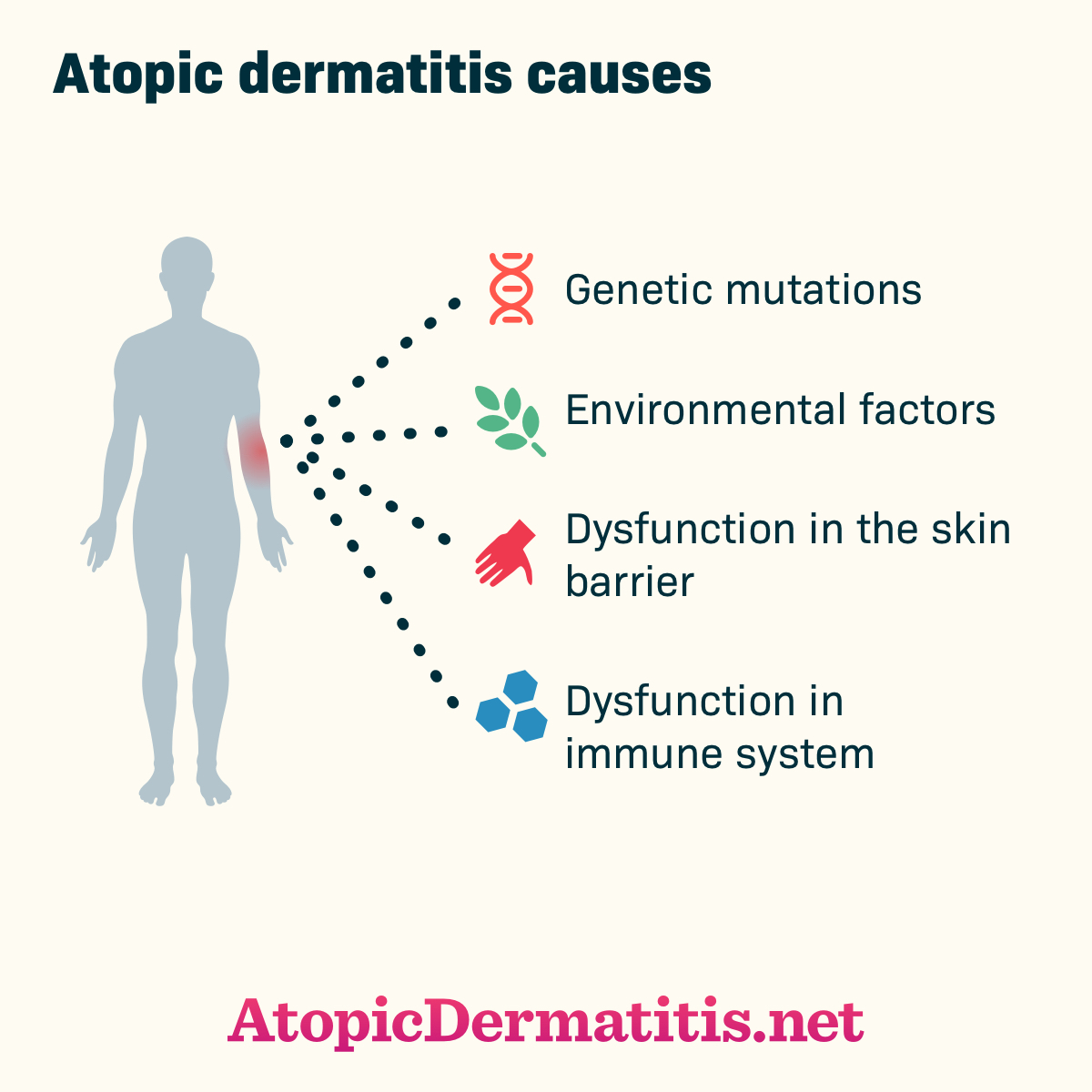 The primary function of the skin is to act as a barrier that restricts water loss and prevents the entry of irritants, allergens, and pathogens (bacteria, viruses, or other microorganisms that can cause disease). The corneal layer, the outermost layer of the skin, contains a protein filaggrin that plays a key role in its structure and formation.

The gene that codes for this protein is called FLG, and researchers have identified more than 40 mutations in this gene that have been associated with about half of patients with moderate to severe atopic dermatitis. However, not all people with FLG mutations develop the skin condition, nor do all patients with it have FLG mutations. While FLG is the first identified and most well-studied gene related to atopic dermatitis, researchers are working to identify additional genes that contribute to the development of the condition.2

There are several theories about the mechanisms by which filaggrin defects contribute to the development of atopic dermatitis. Not enough filaggrin in the corneal layer can lead to a reduced ability to maintain the skin’s natural amount of water. Excess water loss can lead to dry skin, which then causes itchiness. The lack of filaggrin may also allow for the entry of airborne allergens to enter the skin, which could lead to an inflammatory response by the immune system. Another theory suggests that the normal pH of the skin barrier may be affected by filaggrin defects, which could lead to the overgrowth of bacteria. This could then trigger the immune system to create inflammatory skin lesions.2

While having a genetic predisposition puts people at a greater risk of developing atopic dermatitis, the mutations to FLG alone don’t create the skin condition. Research has identified that environmental factors also play a role, including:

Is atopic dermatitis an autoimmune disease?

Dysfunction in the immune system also plays a role in the development of atopic dermatitis and thus current research classifies atopic dermatitis as an autoimmune condition. In a healthy immune response, the body’s immune system recognizes foreign substances by the antigens on the surface of invader’s cells. The immune system consists of white blood cells and certain chemicals and proteins in the blood, such as antibodies, complement proteins, and interferon. Some of these attach to foreign substances in the body, while others work together to help the immune cells. One of the white blood cell types is the T-cell lymphocyte. T-lymphocytes, or T-cells, attack the antigens directly and help control the immune response.3,4

In conditions like atopic dermatitis, the immune response is abnormally over-activated, causing a chronic inflammatory state. In atopic dermatitis, the T-helper cell 2 (Th2), a subset of T-cells, are drawn to the skin in large numbers by cytokines (chemical messengers) like interleukin-25 (IL-25), interleukin-33 (IL-33), and thymic stromal lymphopoietin (TSLP). These cytokines are overexpressed, meaning there are too many of them. The abundance of these cytokines calls the Th2 cells to the skin, causing the characteristic presentation of inflammation of skin seen in atopic dermatitis.5

The immune system in AD also produces elevated levels of immunoglobulin E (IgE) when exposed to an environmental allergen. Immunoglobulin is a type of protein that is part of the immune system and that acts as an antibody to attach and destroy foreign substances. There are five different types of immunoglobulin, and the IgE protein is found in increased levels in people with allergy. IgE causes the body to release histamine when it comes into contact with an allergen.6,7

Atopic dermatitis and the hygiene hypothesis

One theory that relates to the cause of AD is the hygiene hypothesis. People who are exposed to more pathogens have a less likelihood of developing AD, and there is an increased incidence of AD in people from developed countries. Researchers have theorized that this may be due to an increase in hygiene in developed countries, including an increased use of antibiotics. Additional research is needed to determine if there is a causal link between antibiotic use early in life and the development of AD.8

I Can't Live a Normal Life with Atopic Dermatitis

What is Topical Steroid Withdrawal (TSW)?