Me & My Doctor: Results from Our HCP Satisfaction Survey

What matters the most in your treatment? Chances are, your healthcare team makes a big difference in how you feel about your care. A good doctor-patient relationship can help you feel more in control of your health, and more prepared for the journey ahead. On the other hand, a bad doctor-patient relationship can leave you with more questions than answers, and increase anxiety. We set out to find out what a “good doctor” really means to you.

Who took our survey, and who were their healthcare providers?

Of those who took the survey, about three out of four were female. Their doctors were more often male, about 60%. Survey takers had a mean age of 60.3, while people estimated their doctors to be between 40 and 59 years old. While ratings for thoroughness and satisfaction were similar for male and female doctors, female doctors were reported as having better interpersonal skills.

How do patients decide which doctor to see?

So many factors influence which doctor you see, some your choice and others out of convenience or necessity. Location, insurance, credentials, years of experience, and the doctor’s specialty were just some of the factors listed as important in choosing a doc. Word of mouth was also a factor. Most people ended up finding their current doctor via a recommendation from another doctor. How did you find your doctor? 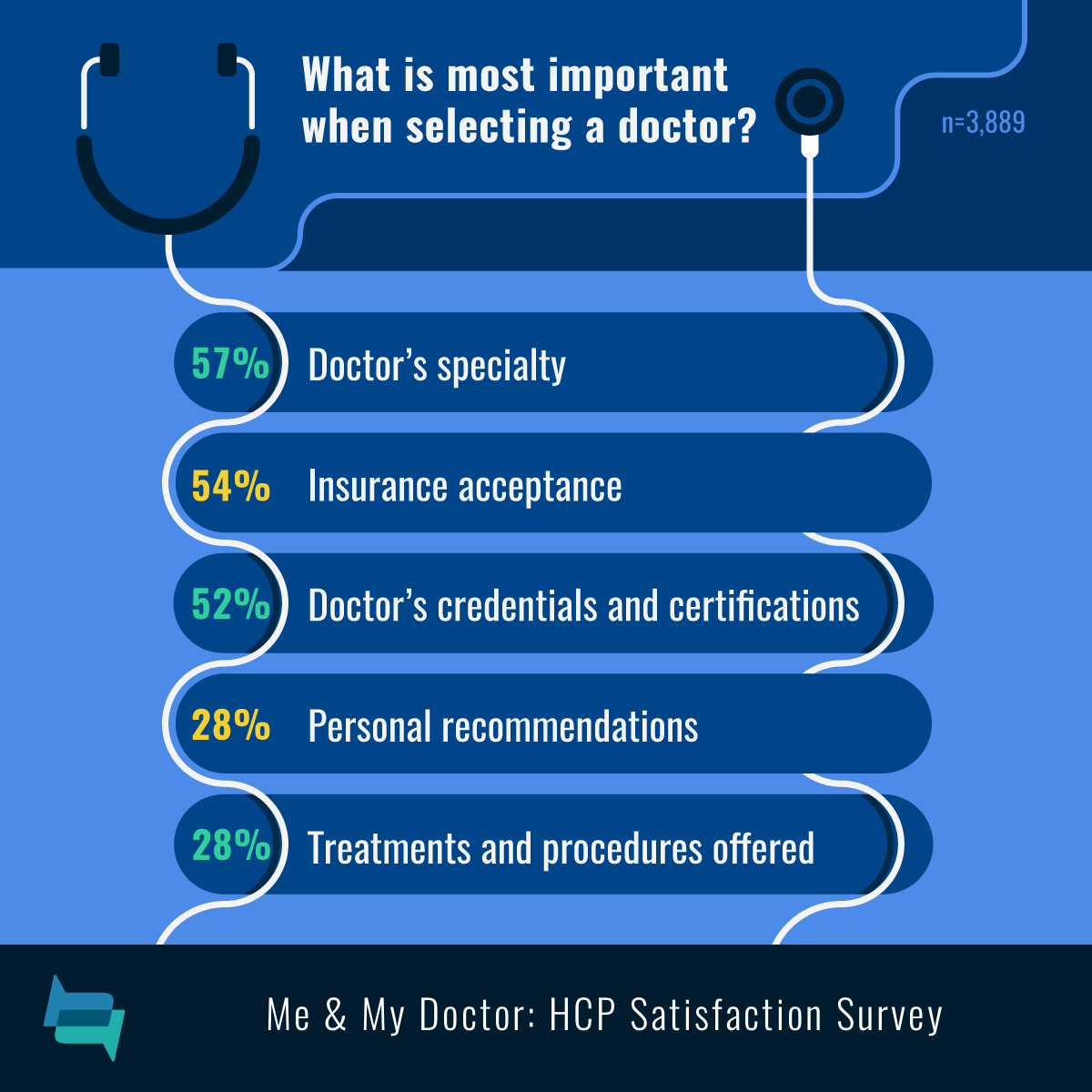 Are you satisfied with your doctors?

65% of the 3,889 people who took our survey said they were satisfied with their healthcare provider (rating a 6 or 7 out of a 7-point satisfaction scale). But what does satisfaction really mean, and how do you measure it?

We dug into the different qualities that make a doctor-patient relationship satisfying. Perhaps no surprise, many positive examples related to the way doctors communicate. When asked to describe why they were satisfied, people described their doctors as:

What are the doctors doing well?

Similar to what makes for a satisfying relationship with a doctor, communication defined what many doctors are doing well. Speaking in a way that helps patients understand, being available when they have questions, and creating a space without judgement all ranked high. It’s important to be respected and heard when discussing your health. 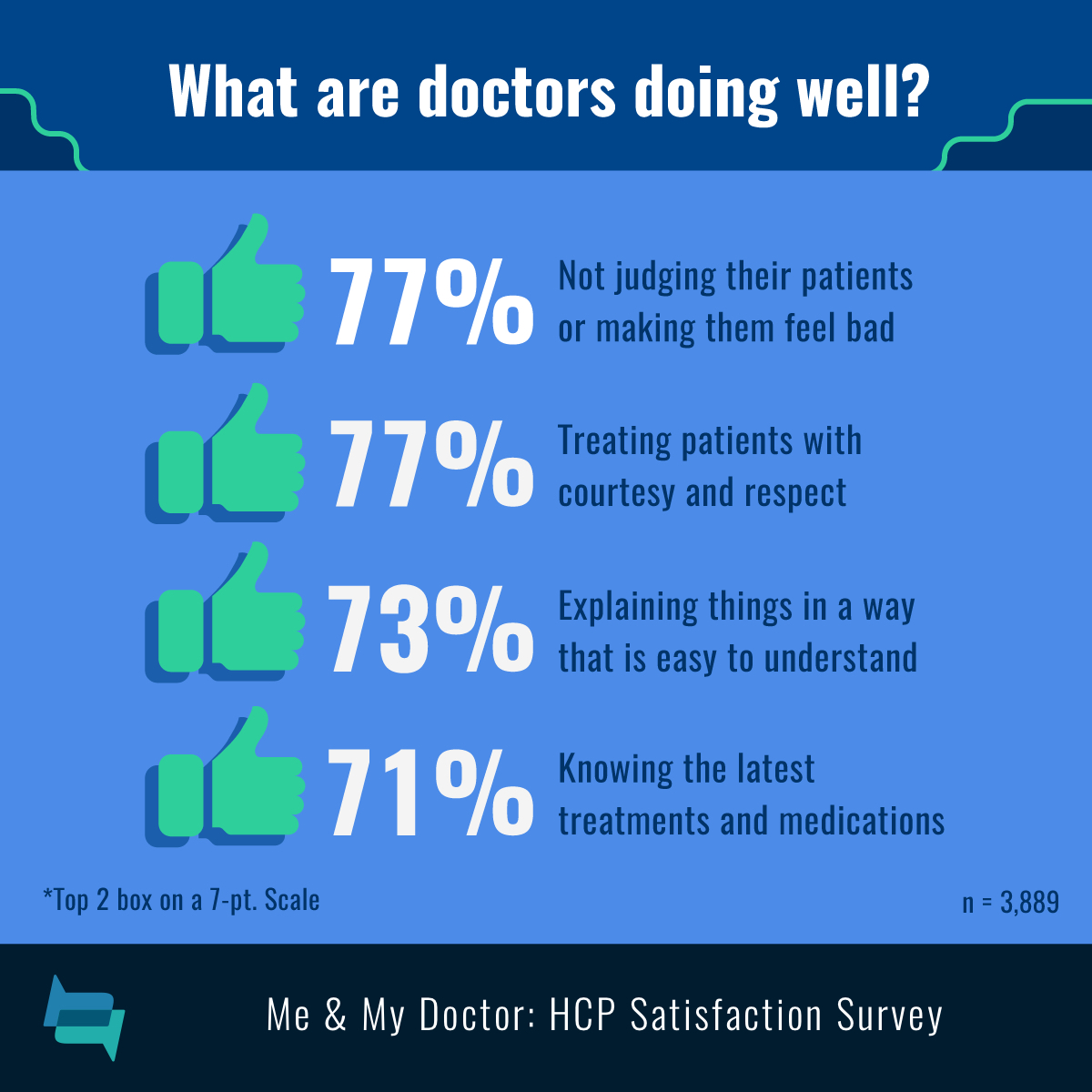 “Thoroughness”: Another side of satisfaction

We might all agree we want our doctors to be thorough. But like being a “good doctor,” being thorough can have more than one definition. We wanted to know: what does “thoroughness at a doctor visit” mean to you? Big themes popped up including… 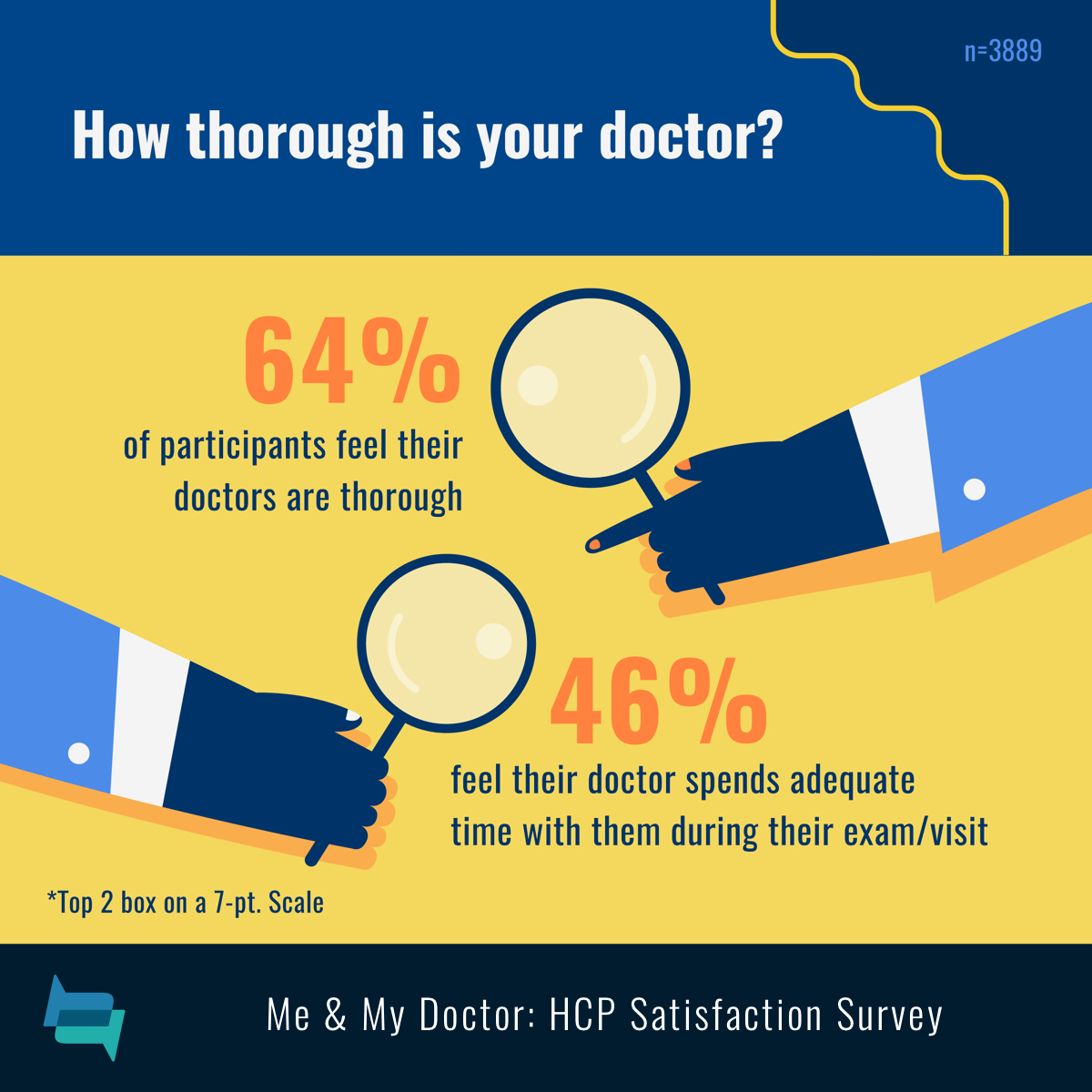 It’s increasingly possible to interact with doctors even outside of the examination room. This ability to have interactions with the doctor outside of the traditional doctor’s office was also connected to people’s view of thoroughness of a doctor and their practice.
Some technologies that impacted thoroughness included:

Despite generally high levels of satisfaction, there are some big opportunities for improving the doctor-patient relationships. People expressed that there was more to be desired from their doctors when it came to discussion of cost, collaboration between the various doctors and other members of the healthcare team, explaining what to expect with a condition or its treatments, and in treating them holistically. 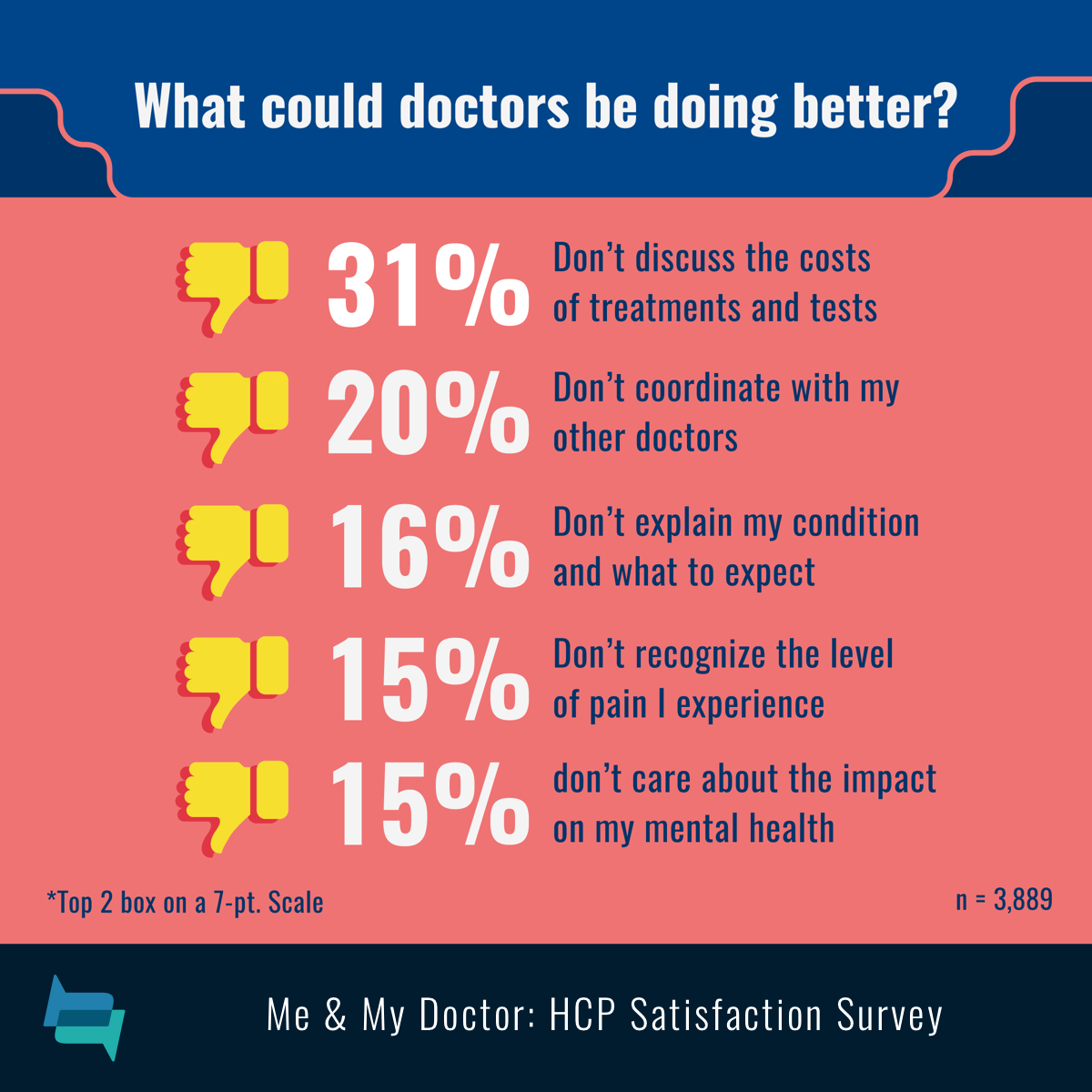 What about autoimmune conditions?

For those participants living with autoimmune conditions (as opposed to those living with cancer), doctor-patient relationships often fared worse than average: 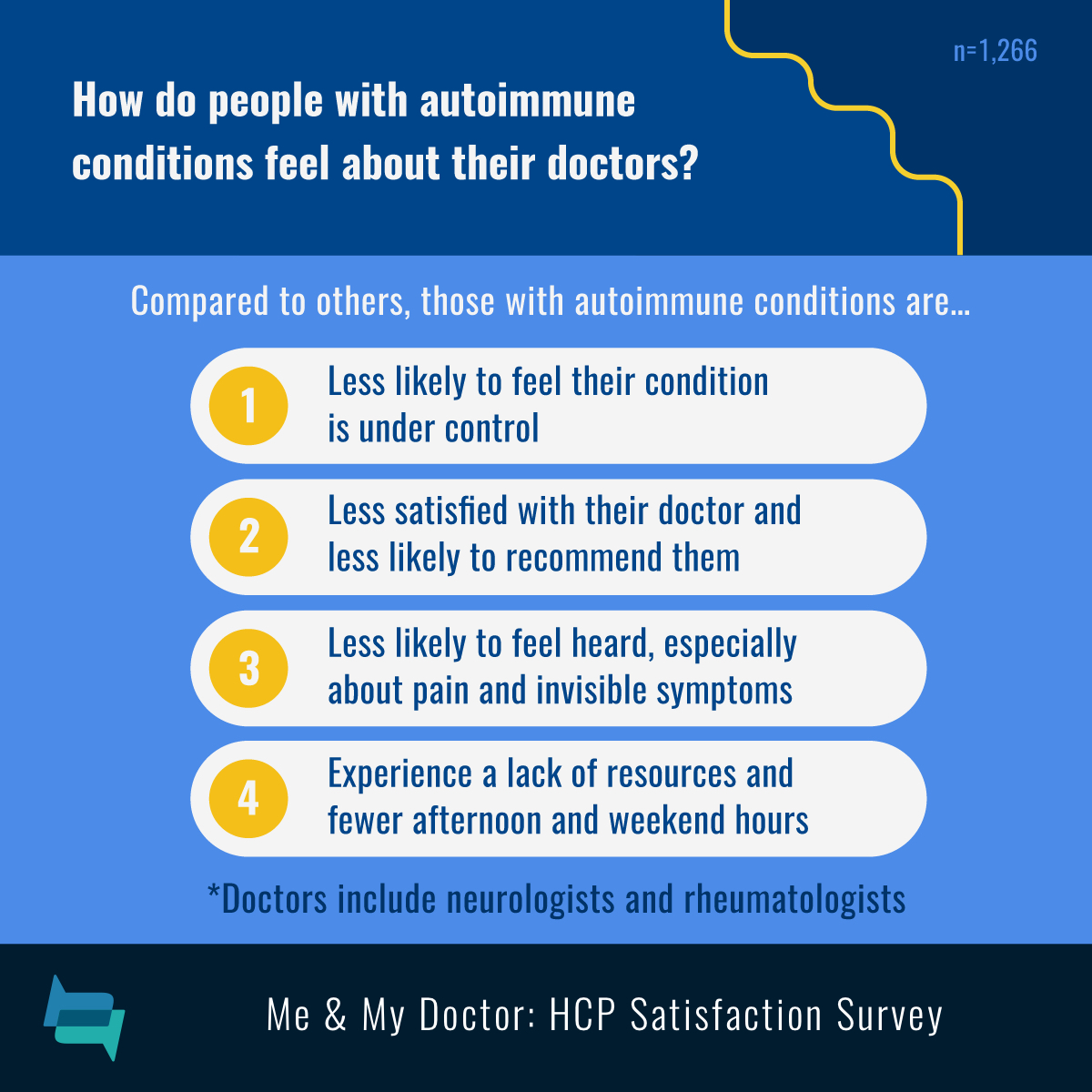 It’s not too late to share your feedback! Let’s discuss in the comments. What makes a good doctor-patient relationship for you? Are you happy with your current doc?

What’s the Verdict on Celery Juice for Eczema?

How to Find a Great Dermatologist