Atopic dermatitis, commonly called eczema, is most known for its itchy, dry, and scaly patches. But there is so much more that lies beneath the surface of life with eczema. Living with persistent itch and never-ending flares can impact more than what’s on the surface of an individual’s skin. Living with eczema means living with irritating sensations, limitations on daily life, and an unpredictable, visually stigmatizing condition that can impact one’s self-esteem and confidence. And, it all starts with a flare.

There is no rhyme or reason for the emergence of eczema flares. While triggers such as sweat, allergies, and stress can all play a role in creating an eczema flare, there are times when there’s no telling when it will rear its ugly head. It’s this unpredictability that can lead to frustrations or the interference of daily life and social activities. It can put eczema warriors at the starting line of yet another scavenger hunt of “What might have caused a flare this time?”

Not only are the onset of flares at times unforeseeable, but the skin’s reaction to a variety of remedies and treatments can be uncertain. Treating flares can be a game of rolling the dice and can leave warriors questioning if they will ever have control. 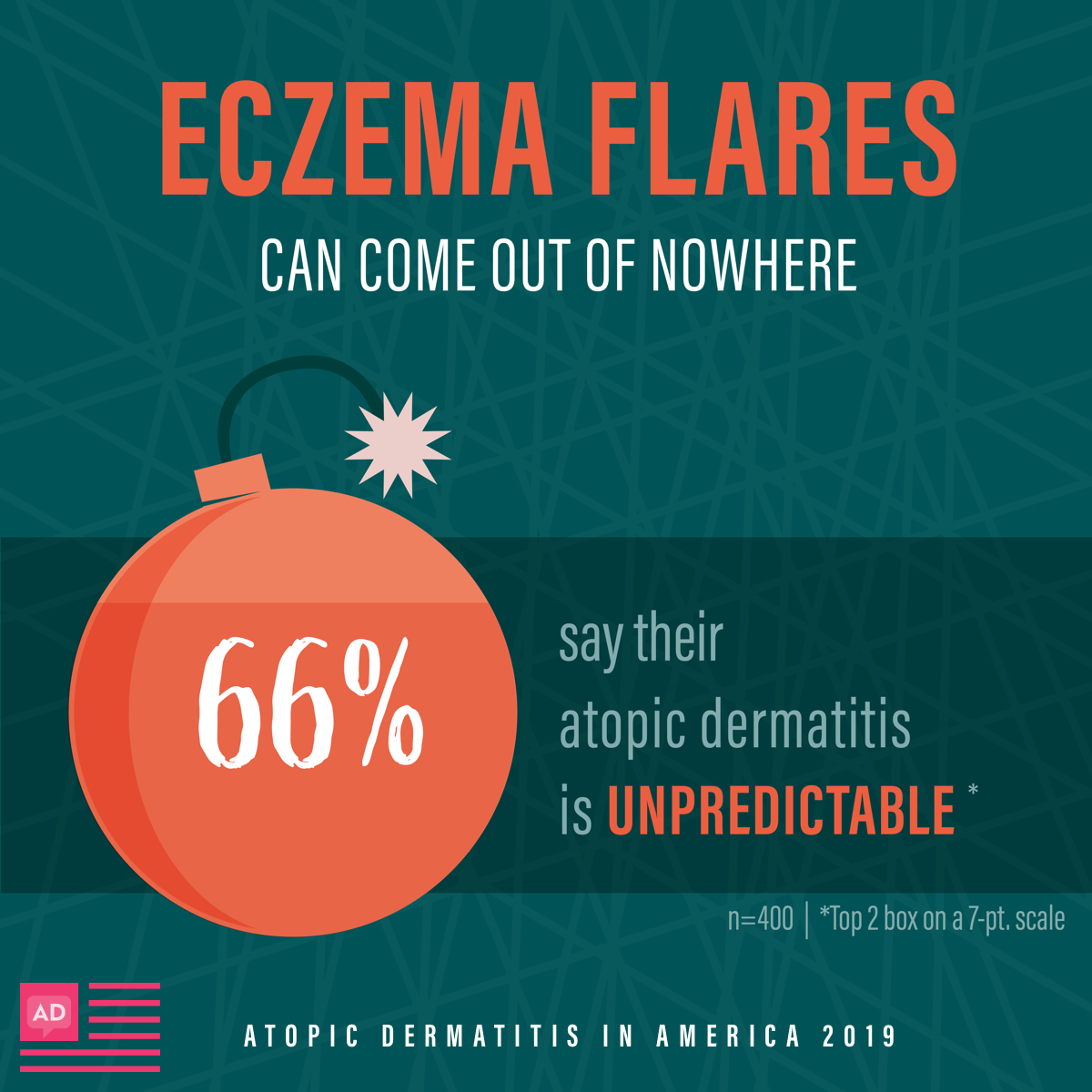 Flares can not only be unpredictable, but they can also be ongoing and frequent. Those itchy, dry, scaly patches can come and go quickly or just remain, like an unwanted visitor who’s overstayed their welcome. The redness, discoloration, and flaking are not the only symptoms that last through the duration of a flare. The irritating sensations of itchiness and pain can be buried deep in the layers of a flare. And that itch-scratch cycle? It’s put on repeat. Can warriors ever catch a break? 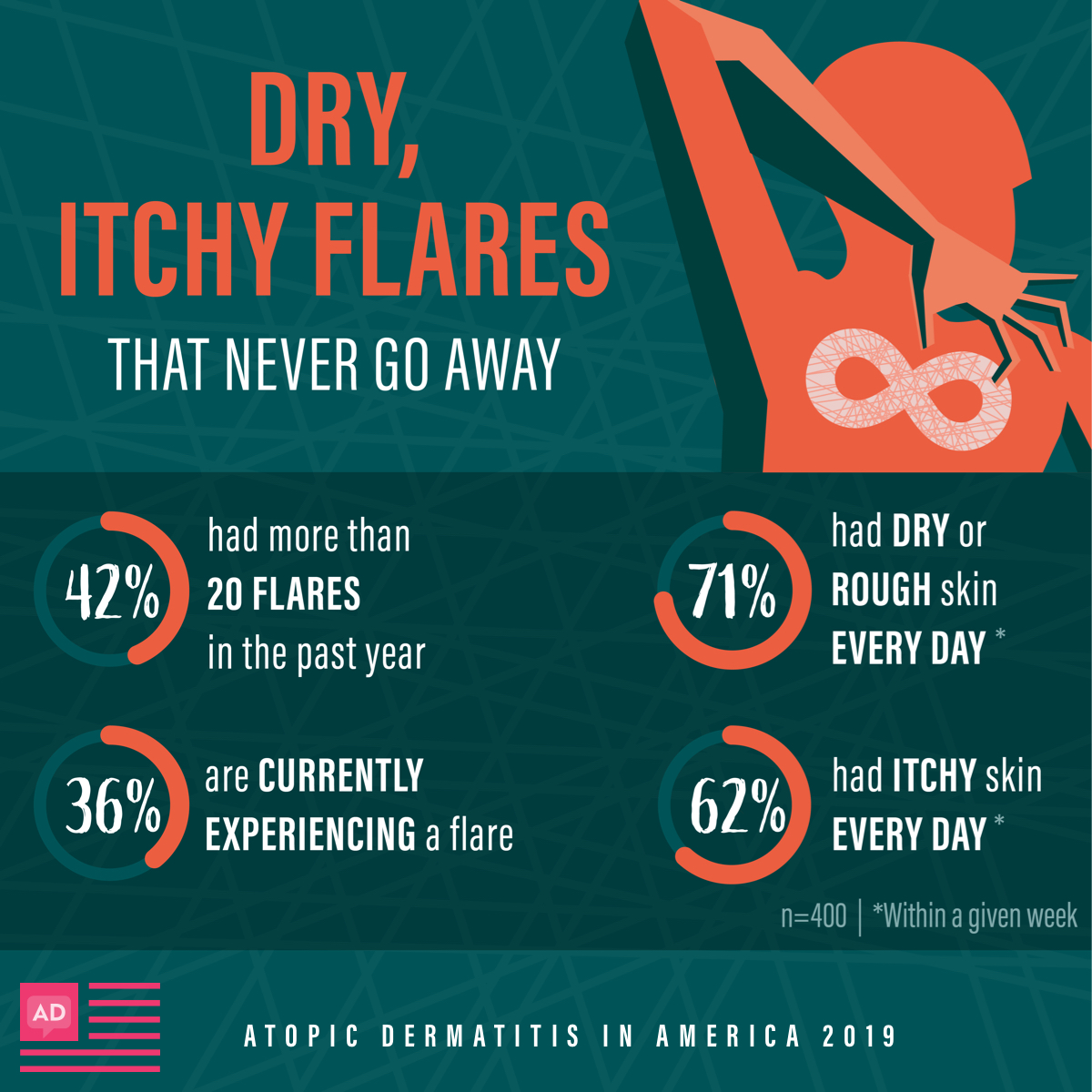 Flares don’t always occur in one location. Multiple flares may infiltrate a variety of places on the body. Atopic dermatitis flares aren’t picky about where they decide to appear. The entire body is fair game, although age can indicate commonly affected areas. For adults, this typically means the elbows and knees, neck, face, hands, wrists, feet, and toes. Some may even experience eczema on the ears. 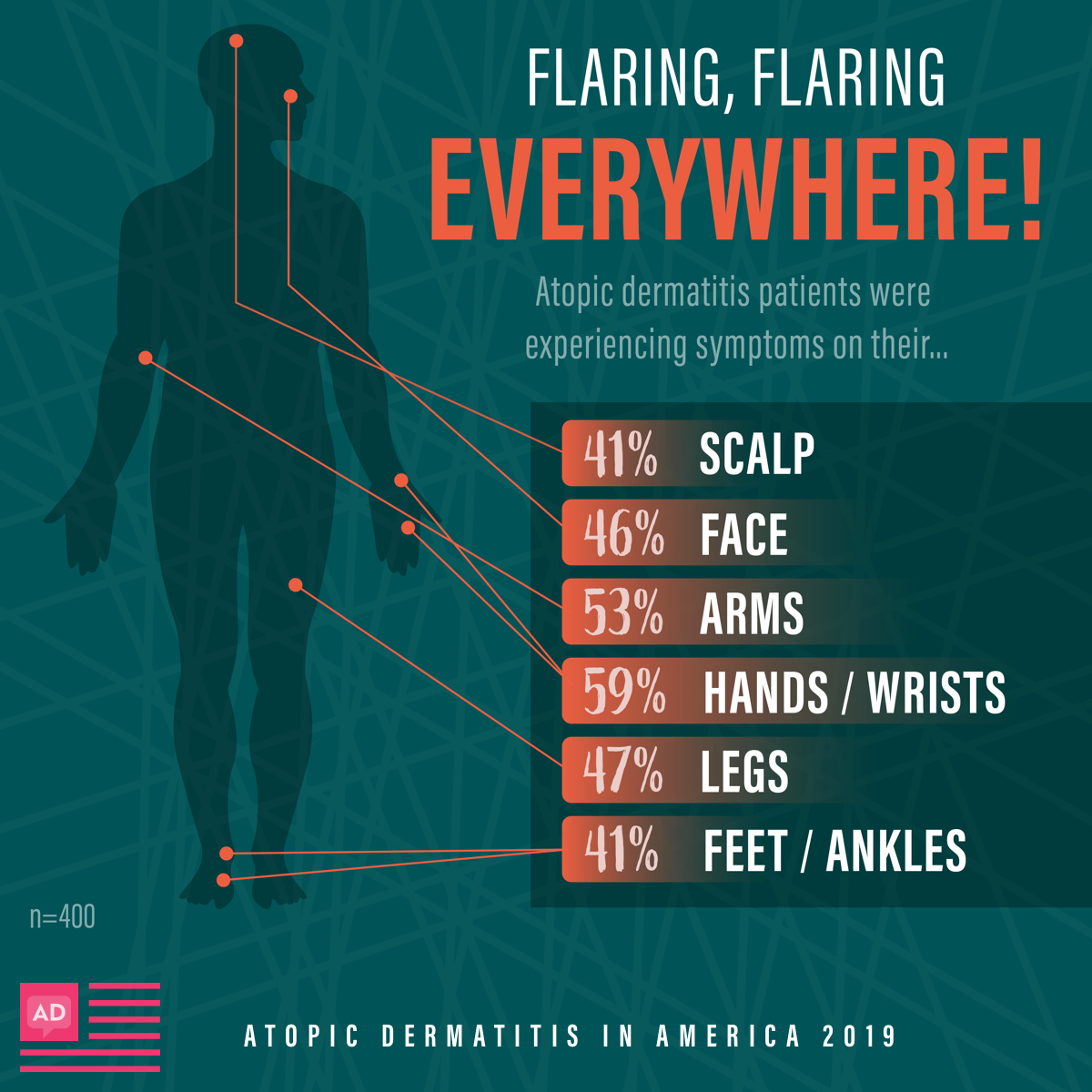 Each stage of a flare can bring a variety of emotions. From stress to frustration to surprise or annoyance, eczema flares have a tendency to force us on an emotional roller coaster of sorts. From the gut feeling that a flare is about to pop up, to the counter-attack with treatment, tensions can be high. Warriors typically don’t feel relief unless their flare gets under control and eventually vanishes, but this doesn’t happen for all who live with atopic dermatitis. 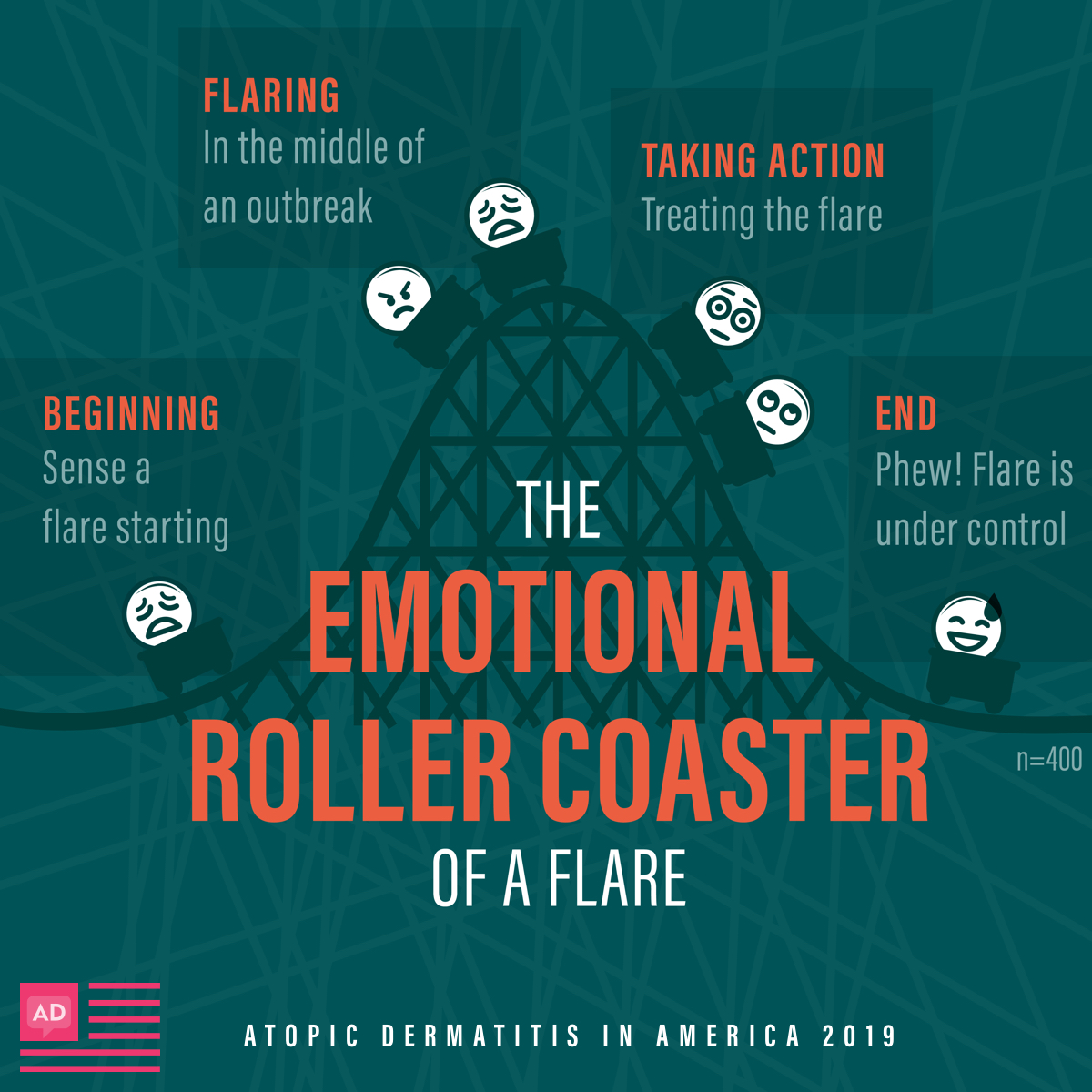 Beneath the surface of eczema

Atopic dermatitis is so much more than a flare, but that one flare can affect so many aspects of the everyday life of a warrior. From waking up in the morning and deciding what to wear, what to eat, and what to do, a life with eczema can be restrictive. Atopic dermatitis not only leaves warriors vulnerable to infection, bacteria, and irritants but also the emotional and social burden that comes with living with a skin condition. It can impact self-confidence and self-image. Life with eczema is so much more than meets the eye. And, it all started with a flare. 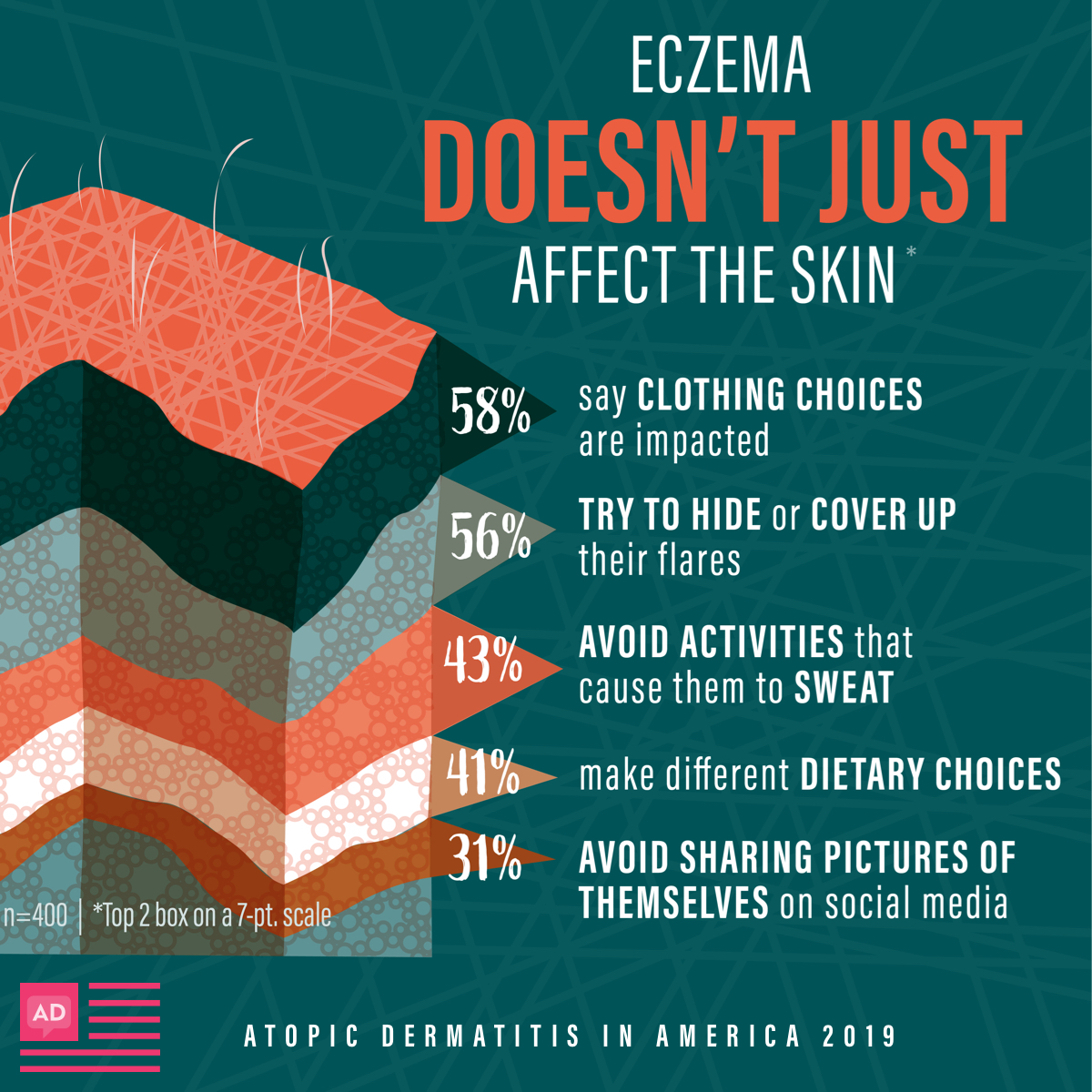 The Atopic Dermatitis in America 2019 survey was conducted online from March through July of 2019. Of the 424 people who completed the survey, 400 were people who have been diagnosed with atopic dermatitis.