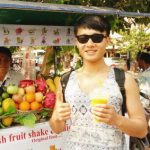 If I asked you to name three symptoms of eczema, you’d probably say “itchy, dry, and um, flaky skin?” Well obviously, because these are literally the principal features of eczema itself.

Today will be different. Having lived with eczema for 15+ years, I have collected a number of symptoms which are both strange, and fascinating, that I’d like to share with you. See if you identify with any of these!

Do you have partial thinning or loss of hair in the outer third of your eyebrows?

The Sign of Hertoghe (which I still cannot pronounce), is a common sign of underactive thyroid and atopic dermatitis. It’s named after thyroid function researcher, Eugene Hertoghe; it’s also associated with Anne of Denmark in the 17th century, but this seems to be disputed.

This is a highly specific location and confirms with eczema patients I’ve met in person. Myself included. This happens to me only after adolescence. In fact, I predict it is a symptom for those entering adulthood. It brings no harm and occurs from an unconscious reflex to remove hair.

Do you have panda eyes? Are the space below your eyelids darkened?

This results from an edema, which means abnormal circulation of fluid, in people with atopic dermatitis. In fact, this symptom is accurate enough to be adopted as a diagnostic criterion for allergy with above 75% accuracy.1 However, the mechanism behind is unknown.

The Dennie-Morgan fold should not be confused with allergic shiners, which are black eyes (or purple-gray discoloration), resulting from blood accumulation due to nasal congestion.

These conditions are all inextricably connected through genetic risk factors. You might experience them one at a time, or simultaneously at different life stages. Personally, I used to sneeze about 30 times each morning in primary to middle school. Food allergy was always present, but I never developed asthma.

Unfortunately, the atopic march is manifested due to our genetics.

According to Dr. Manuel Ferreira of the QIMR Berghofer Medical Research Institute, “… these genes influence the risk of asthma, hay fever and eczema by affecting how the cells of the immune system work.” There are 136 identified genetic risk factors behind the connection.2

Fortunately, genetics can be influenced based on the understanding of epigenetics. “For example, we found one gene — called PITPNM2 — that is more likely to be switched off in people who smoke… [and] the risk of developing allergies increases,” said Dr Ferreira.2

Do you find yourself better at fighting common infections (e.g. cold, flu)?

We know that eczema is more than a skin condition because there’s something wrong with our immune system. In fact, one theory believes that people with eczema suffer from Th1 dominance, which basically means we have too many of one specific group of immune fighter cells which keep our body at bay. We need it, but we just have too much.

What’s fascinating is that the downside of Th1 dominance triggers eczema development and high sensitivity towards food allergies. The upside is that such extra immune alertness we have helps us in fighting common extracellular infections, i.e. outside of our cells.

Do you experience bloating, constipation, and digestive irregularities?

Leaky gut syndrome is no longer a new term. But perhaps it is simply a term coined to describe the more distant symptoms (e.g. digestive as opposed to topical)? While there is plenty of ground for debate on the evidence of leaky gut syndrome, in my opinion, it is only a matter of time to build up links of evidence.

From personal experience, and eczema patients I have come across, we tend to have digestive issues. Personally, I bloat if I have too much dairy. I don’t have extreme lactose intolerance but I don’t feel well if I overeat dairy. Another issue I used to have was persistent constipation.

As cliche goes, by Hippocrates: “All disease begins in the gut.”

Including eczema, do you also experience psoriasis, butterfly rashes, and white purplish lips?

Like the atopic march, which is the jump, or inevitable manifestation, from one condition to another (e.g. from eczema to also asthma), I have also noticed the extension of regular eczema patch locations, to jump around from arm/leg creases, to psoriasis and facial symptoms.

I put this section at the end because this extension hypothesis that I have continues to resurface from time to time, as my level of eczema fluctuates. Most often, white purplish lips (as opposed to healthy reddish lips) accompany my eczema. When I feel worse, my regular patches in arm/leg creases will trigger facial rashes which look like a butterfly rash. When my skin gets really bad, I develop small little psoriasis patches around my body in random locations.

Do you feel more irritable, higher in body temperature, and more alert?

Unsure how to describe this feeling I get, but I’ve noticed one thing. From primary to high school, my eczema was highly obvious and problematic in my life. It was not until later in University years I learned to manage down to 10% of symptoms. But this transition meant I lost this fascinating ability: tolerance to the cold temperature.

When I was younger, I never really caught a cold despite wearing fewer clothes than most people in winter. I felt a higher body temperature in general. It might not be literally, but at least the feeling of heat is throughout the body. And accompanying that is a higher level of irritability, and on the upside, alertness. I hypothesize it is due to higher levels of stress due to immune overdrive. Something to do with cortisol and adrenaline in the endocrine system. But for now, I call it “feeling heated up.”

Do you identify with any of these? Do you have unique symptoms?
Share with me in the comments below! It’d be interesting to learn what eczema brings.