I’m not a cat person, although as everyone knows, a cat will always find the most allergic person in the room. As a child many years ago, I began having allergy testing done which showed cats and grass as the most problematic. I still remember those raised, itchy bumps on my arms. Or at times on my back.

Where do cats and dogs fall on my allergy list?

Over the years I’ve had many allergy tests, and some changes, but those two have remained at the top of the list. Dogs were always on the list as well but closer to the end, well after even molds or dust mites.

How many people are allergic to cats and dogs?

I’m not alone in this. In the United States, as many as three in 10 people with allergies have allergic reactions to cat and dogs. Cat allergies are about twice as common as dog allergies.1

A few years ago I decided to try the series of allergy shots for grass. After two years, we added in cats as well. The aftereffect of the shot then became a hot, itchy arm, swollen from shoulder to elbow. We finished that season’s shots with a much smaller dose, then back to just grass the next year. Those shots for grass haven’t completely stopped my reactions, but have definitely lessened the severity and number of occurrences.

Does early pet exposure help with allergies and eczema?

When I was growing up, our family had a dog who lived until I was about seven. Recent studies have shown there could be a possible protective effect from early pet exposure. Could that have helped with my allergies? But then another study showed no clear evidence that early pet exposure was associated with increased risks of subsequent eczema. So the results are conflicting.2

Our dogs through the years

When my children were small we had the best little dog for about 15 years; a chihuahua-Yorkie mix. She didn’t seem to affect my son’s asthma or my eczema at the time.

My daughter now has two wonderful little dogs, one short hair who sheds terribly, and the other is half mini American Eskimo with the long fluffy hair. Strangely the short-haired one that sheds doesn’t really affect my eczema as much. But the other, who of course wants the most attention, now sets it off every time.

Is it the dog saliva or something else? 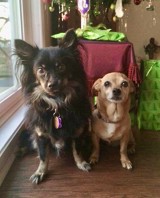 Lately, when I visit with these two "grand dogs,” as they call them, I start to itch. They’ve never been allowed to lick, as I’ve always known that the proteins in their saliva would cause a reaction. Now just giving a good belly rub or scratch behind the ears starts it. I touched my face the other day after greeting them, and very shortly afterward I realized a flare was starting. Or was it just that I made the allergens airborne? We’ve ruled out other things that might be causing it at their home, as it has now started to happen when they come here to visit.

It’s not that I see them that often. I even used to babysit, dog-sit? with no problem. They weren’t allowed in my bedroom, but had free rein otherwise.

Anyone have any ideas or suggestions?

Why has it changed? They haven’t had a change in food or shampoo. But they have moved; to another house in the same city. Maybe a change in the grass they love to roll in? Any ideas? Or suggestions?

Living a Lifetime with Eczema

Atopic Dermatitis and a Low-Carb Diet

2 comments
This article represents the opinions, thoughts, and experiences of the author; none of this content has been paid for by any advertiser. The AtopicDermatitis.net team does not recommend or endorse any products or treatments discussed herein. Learn more about how we maintain editorial integrity here.

How often does eczema impact your face?