The Hardest Part of Having a Toddler with Eczema 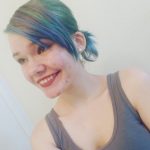 Welcome to part 2 of the interview with my mom! In part one, Going Back in Time to Where it All Began, I shared how I was diagnosed and the changes my mother had to make to my diet. Today I am sharing a struggle that was harder than any dietary change that had to be made.

How hard was it to teach me to avoid the foods that triggered my eczema?

Well, it was surprisingly easy for you. You pretty much just ate whatever I gave you. Another thing that worked in my favor was that you loved fruit and vegetables. You’d go to town with a head of lettuce. Haha!

It was really when you started having snacks or meals with others when you realized “Hey, wait a minute, I want that,” or “Why can’t I have that?” I had to remind you that eating those things would make you sick and hurt your belly. And that’s what I’d tell you because it was the truth. Thankfully you were terrified of physical pain and would avoid the foods you knew you couldn’t have.

I was worried you’d have my horrible self-control and have it anyways just because you wanted it. But you were different. Maybe it was because it began at such a young age and you weren’t used to having that type of food. Whatever the reason, it was easy for you to say no, which made it less stressful for me.

The struggle was real!

The hardest part was when you would spend time at a relative’s house, with somebody who wasn’t aware of how important your diet was, and when you went to Sunday School.

Sunday School and VBS (vacation bible school) were the worst for you. The age range of 3-8 felt like an epic battle between me and those who provided snacks. Thankfully you weren’t the problem. You knew what you could and couldn’t have and you did not want to feel like crap. The problem was other people.

Nobody took it seriously, they were just like “Oh, it’s just a rash,” or they didn’t believe you when you told them you couldn’t eat something. Even when I was the one to inform them, they’d be like “Oh well okay, she’s just overprotective or neurotic.” They would insinuate that I was making a big deal out of nothing. But I wasn’t making a big deal out of anything. I told them straight out you couldn’t have it. But, of course, they would try to give you something or there would be someone who just didn’t understand and think you were refusing food. They would get all upset, saying “No, you need to eat.”

It didn’t help that you were a small kid and that you were very tiny. You weren’t underweight, it wasn’t like you were a skeleton, but you’re small-boned. You’ve always been petite and tiny, so people would look at you and think, “Well let’s fatten her up, she’s got to eat more.” As someone who has always struggled with weight, this baffled me.

Self control with food triggers

You would get so mad when people would try to feed you something you couldn’t have. You had little arguments with the VBS teachers about the food. Most of the time I would send your own food, to make things easier. Of course, that caused problems too, because you had something other kids wanted. So there was that dilemma as well.

Luckily you did know how to stand up for yourself, I must have ingrained it enough in your head when you were young because you had no problem saying no. I don’t remember actually sitting down with you or anything and telling you that. You must have had enough years of eating a certain way and know what foods you can’t have.