Does scratching eczema make it worse?

However, scratching can cause complications: scratching further damages the skin barrier, leading to a worsening of symptoms, thickened patches of skin (called lichenification), and increasing the risk of infection. In addition, scratching at night can cause disruption to sleep, as people with atopic dermatitis may wake repeatedly during the night to scratch due to the excessive itchiness. The repeated waking and loss of sleep is one of the most distressing impacts of atopic dermatitis on children living with the condition, as well as their family members.1-4

What is the itch-scratch cycle?

The exact disease processes that cause itch in atopic dermatitis are not completely understood, but doctors know that the “itch-scratch cycle” (the skin feels itchy, which leads to scratching, which then causes the skin to feel even more itchy) perpetuates the disease. One of the recommendations for good skin care is to avoid scratching. Although it can be frustrating to hear “Just stop scratching,” as if that advice would solve the condition, there are techniques and therapies that can help someone reduce or avoid scratching.1,2 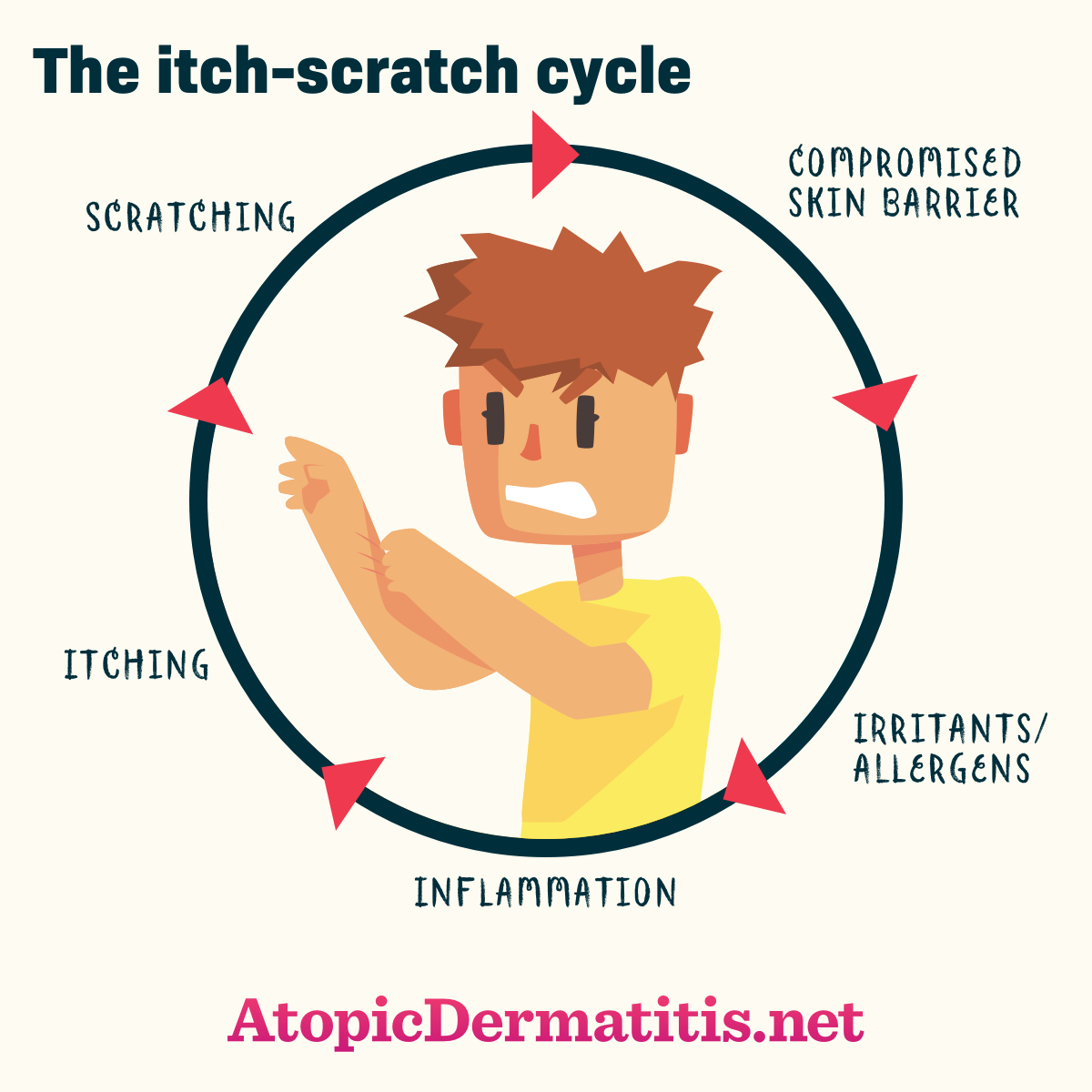 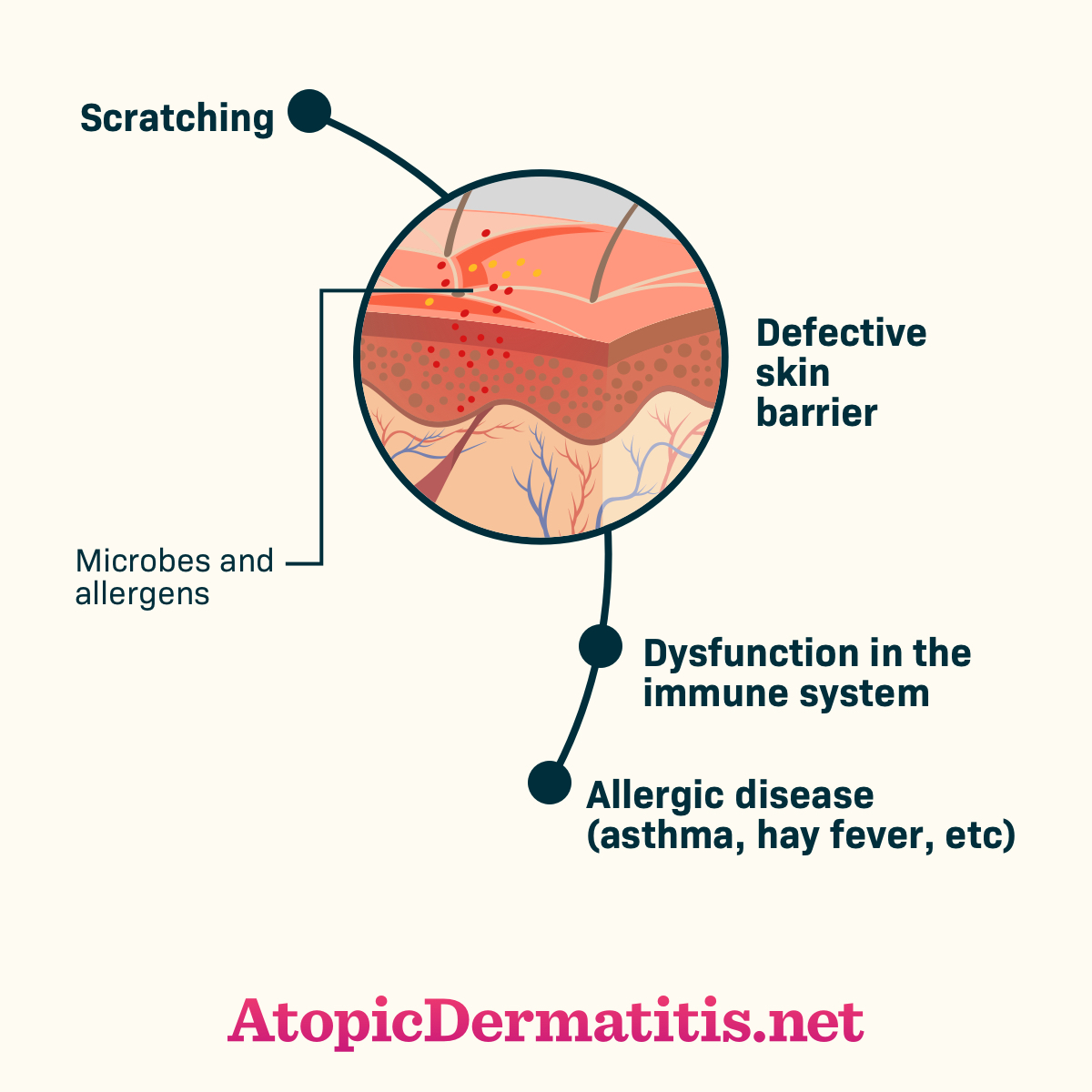 One of the first and most simple strategies that can be used to avoid scratching is to avoid agents and environments that trigger itch.

The most common triggers of itch include:

The sensation of itch is sometimes induced not from the skin, but from auditory or visual information. Auditory stimulation can be hearing someone else scratching their skin, and visual stimulation includes seeing images that suggest itch, like a picture of being bitten by a mosquito. This psychological impact is called “contagious itch,” and people with atopic dermatitis seem to be more susceptible to it than those without the condition. Being aware of this phenomenon can help interrupt its effect.2

How to reduce itch

Frequent moisturizing with emollients will help to relieve or minimize itch in many patients with atopic dermatitis.

Medications to reduce the eczema itch

There are also several medications that are designed to reduce inflammation that may help reduce itchiness, including:

Wet-wrap therapy, with or without a topical corticosteroid, is another technique that can help moderate to severe atopic dermatitis. Wet-wrap therapy involves applying the medication (if using) and wrapping the affected area in a layer of wetted gauze, cotton, or bandages, followed by a layer of dry bandages. Wet-wrap therapy helps improve the moisture of the affected skin, improves the penetration of the topical medicine, and provides a physical barrier against scratching.5

Breathing exercises for the eczema itch

Some people with atopic dermatitis also find it helpful to engage in conscious breathing – focusing on the inhalation and exhalation of air into and out of the body – when the desire to scratch emerges. Others find positive self-talk can support avoiding scratching. In addition, it can be helpful to keep fingernails trimmed short to reduce the damage done to the skin during scratching.

Other therapies to reduce the itch

Other therapies that may help reduce itch include phototherapy, acupressure, and massage. While more study is needed on alternative therapies like acupressure and massage in atopic dermatitis, researchers believe these therapies may address the role of the nervous system in itch perception.1