Eczema Podcast: Within the Family

I talk to my youngest brother, Cliff, about the effects - physical and mental - of growing up with eczema and how we coped as a family. We briefly touched on the new drug Dupixent, asthma, and how annoyingly spoilt I was as a child. Cliff is a busy guy, and I was extremely grateful he made time to do this.  We agreed to meet in a beautiful park near to my home for a socially distanced chat. 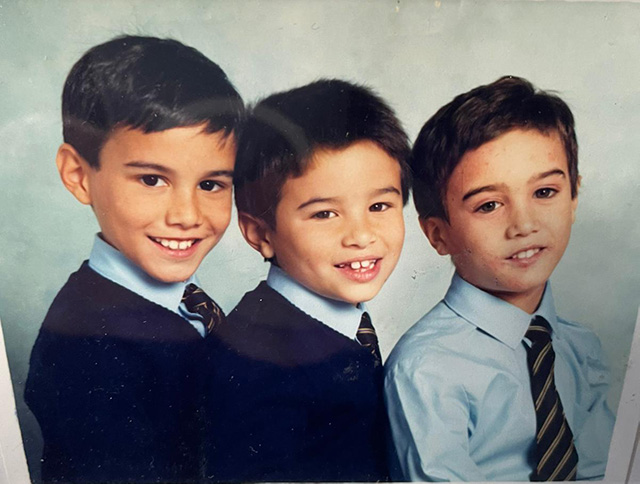 Growing up around someone with eczema

Pete: Hello, this is Pete from AtopicDermatitis.net. Here again, recording another podcast. And today, I'm going to be talking to my baby brother, Cliff. Cliff, we're going to dive straight in. I've had atopic dermatitis all my life, being a sickly child, really, having asthma. So what are your earliest memories of me-

Cliff: And your condition.

Pete: ... and my condition for you and Andrew? My other brother.

Cliff: I think, first of all, I think I knew you had it, but I wasn't aware of really what it was. So I remember, for example, being on holidays with you and you had the marks on your face.

Cliff: You know, you had sores on your face and things like that. I think my overriding feeling and memory about it in the very early days, and of course, you look at these things through juvenile eyes, don't you? But I remember feeling jealous about the attention you got. A lot of mum and dad's attention was on you. You'd always be going off to the hospital. You get special treatment from school and stuff like that. And I'd be like, how do I get in on this action? So I used to look at my arms and hope that I'd get a bit of a sore joint and get some rash.

Pete: So the overriding emotion was jealousy?

Cliff: No, because if you remember, I know it sounds weird, but there's the one time where you had to go into Great Ormond Street. And that was probably the first real-time that I remember you having to go away for a sustained period of time. And I remember everybody on the street knew that you were going and got you presents and loads of toys and stuff.

Cliff: I was really jealous.

Pete: Okay. Moving on to-

Cliff: Obviously not realizing what you're actually going through.

Cliff: And quite frankly, not caring.

Pete: Ha ha. Very funny. But so that was your earliest memory of me being like ill with it and...

Cliff: Yeah. Yeah. I think it was. And then I think I was a little bit too young when we were at primary school together. But then, when I came to secondary school, I think that's when I noticed it. Because I noticed that you had a sort of school personality, and then there was a personality at home. And I think it was because... I don't know; I'm just guessing here. But it was like your humor was amplified, and I could tell it was like you were worried about people having a-.

Pete: It's a defense mechanism.

Cliff: Yeah. People having a go at you and the best-

Cliff: No, I'm joking. You know, you're always very funny and still are, but you are insufferable at times, very irritating, and very OCD at school.

Pete: No. I was on a lot of drugs. I was hyperactive. Don't forget that, you know, after the SPS.

Cliff: I remember you go on the attack with people like with your humor, it was-

Pete: Yeah. It was just a defense mechanism.

Cliff: Best form of attack. The best form of defense is attack. Yeah.

Someone saw through the mask

Pete: But I think I wrote about that one in one of my articles. Remember a girl at school; I think her name was...

Pete: Oh no. Don't say her name. Whoever, don't the name. But she once said to me; I think she made a comment about my skin or something or... I can't really remember. Something about me being shy and that just knocked me back. It was like she saw straight through the mask.

Cliff: But then I think other than school, we are quite a close-knit family, aren't we? And I think, especially when we were quite young if you think we had a busy household, we had our older brother still at home. We had our granddad living with us because he was being cared for by our parents. So it was me, you and our other brother, and they're living and sleeping in the same room, all of that. And I mean, yeah. I remember nights where you'd be itching and half the time... I think the overriding feeling was that I always thought it was under your control and it was [irritating that] -

Pete: Everyone thought that

Cliff: Yeah. Although I still think there are some things which might be under your control.

Pete: Right. Yeah. I know you mean there's things definitely under my control. Things like recognizing the triggers and being able to preempt how you're going to react in certain situations. But what do you mean things [inaudible] my control?

Cliff: I think what I mean by that is that there are times when... Well, first of all, I think I've learned much more about what you go through and what your experience is since you've been writing the blogs. And so in the past, when I've tried to offer advice, or anyone's tried to offer advice, I know it's frustrated you because it comes across as... Well, quite frankly, we are all a little bit ignorant to the condition. And I think what you've done recently has really helped us in that regard. But what I mean by either things that you are in control is sometimes when you're particularly low and depressed because your skin is at its most violent, you can be so down on yourself that you're unwilling to do anything to even try and correct it. Not that these things are necessarily going to solve your issue.
I'm not saying there's a cure out there that you're just too lazy to go and find. But what I'm saying is, is it worth changing your shower gel? Which was one thing that when you were going through about a month or two of bad condition, you still using the same shower gel. And then eventually, when you did change, it helped for a bit. Or if you get access to certain doctors, sometimes you can... In the past, you've been reluctant to go in and talk to those people whereas... And I get why, because you're like, "look, I've heard it all before."

Pete: Not only that, not only that. They've prescribed the same medication in different forms-

Cliff: which is irritating.

Cliff: And you kind of been there, seen it, done it. But I think that's the point is the advice that you get and the frustration around you being in control sometimes isn't that I think there's a magical cure out there. I think sometimes you're in control of at least trying to affect the situation, even if it is just a mental situation where you're giving yourself a bit of peace of mind that you've checked in for the first time with a dermatologist to see if there are any new treatments out there or whatever. And I think that as somebody that lives in your life, that can be frustrating.

Pete: Well, I'm actually in the process of being seen by a dermatologist. So I look forward to seeing what they can offer me.

Pete: Have you heard about this new drug, Dupixent ?

Cliff: I have read a little bit about it from our other brother who sent it through, but not much, no. What is it?

Pete: Well, it's meant to be amazing. I mean, I'm told to get hopes up too high, but-

Cliff: Is this an injection or something, is it?

Pete: An injection. And it suppresses part... Really sure the site's below there, [inaudible] I think it suppresses certain parts of the immune system, so you don't react-

Pete: Yeah, violently to something as you would do without that.

Pete: It's definitely worth trying though.

Cliff: Exactly. Because if nothing else, it's the peace of mind of knowing that you've tried everything, I think.

Pete: And I've heard a lot of good stuff about it online, and on AD.net, lots of people are writing about it.

Cliff: Yeah. So I think that'll work hopefully; fingers crossed, that's something that can help.

Cliff: It's been nine minutes already.

Cliff: Thank you. Thank you so much for doing this and...

Cliff: I think we need to renegotiate my fees, Pete.

Cliff: All right. See ya.

Finding the Meaning in All of This

Have you ever refused a medication or treatment?