Beyond Itchy Skin: The Impact of Living With Atopic Dermatitis

Health Union, LLC conducted a large survey of people who have atopic dermatitis or care for someone with atopic dermatitis during mid-2017. We asked many questions about what it’s like living with a chronic condition that affects people so uniquely. Over 300 people completed the survey. Here are the highlights from what our community shared with us.

Atopic dermatitis is a common skin condition characterized by dry, itchy, and scaly patches. It is commonly referred to as eczema, as well as atopic eczema or just dermatitis. While the intense itch is one of the most frustrating symptoms of atopic dermatitis, it can cause other physical symptoms to the skin and body as well as have an emotional and psychological impact on a person, making it a condition that impacts more than just the skin.

Taking it day by day - life with atopic dermatitis

Atopic dermatitis impacts people differently, with itching being one of the most difficult symptoms to manage. Other common symptoms include red and inflamed skin, weeping or oozing sores, scaling, crusting and cracking of the skin. As a chronic condition, atopic dermatitis may have periods of remission (when symptoms are lessened or non-existent) and periods of relapse (flares of worsened symptoms). Survey respondents reported that dry and itchy skin were symptoms they experienced daily and 99% of respondents found that itchiness is the most frustrating symptom they experience.1 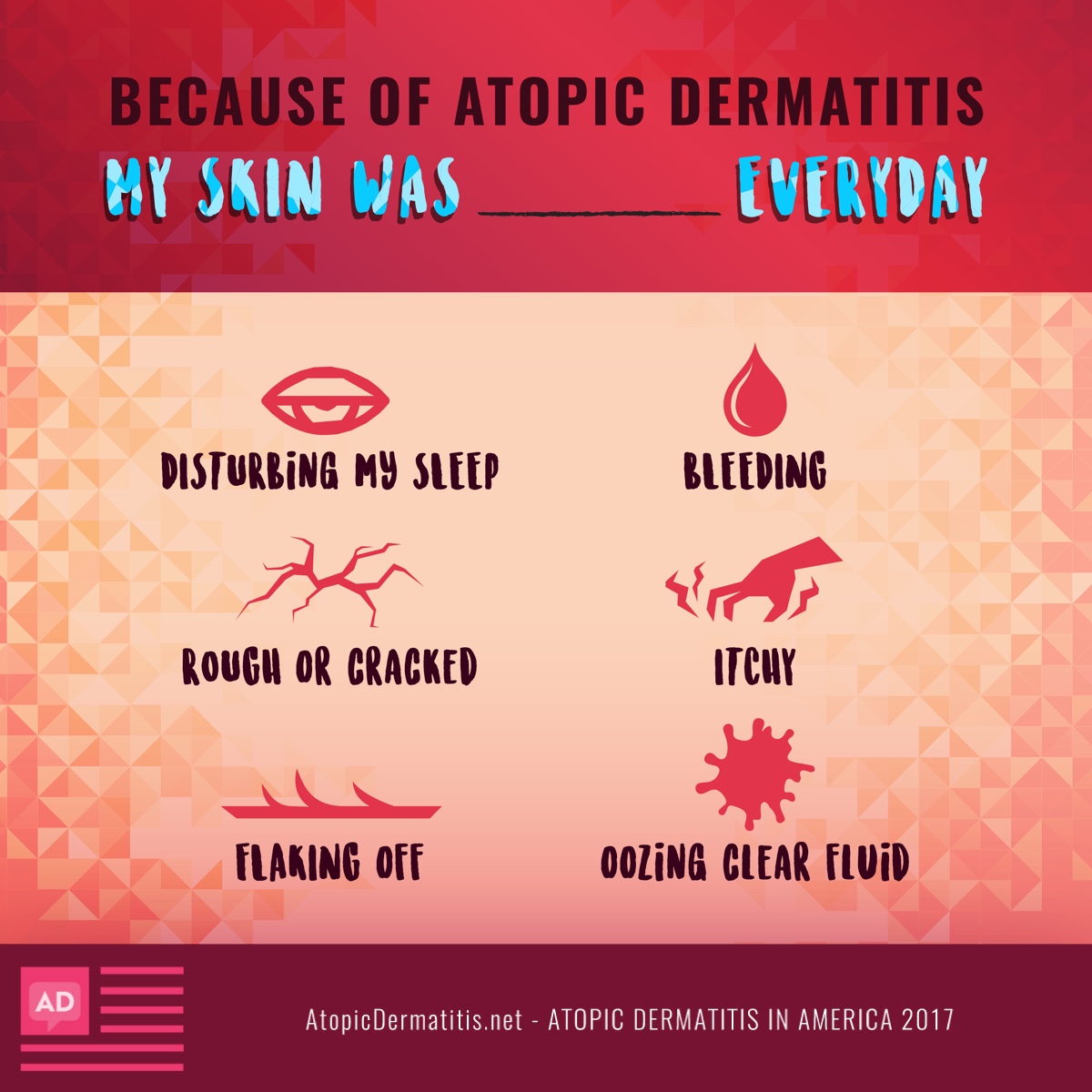 Atopic dermatitis can be complicated 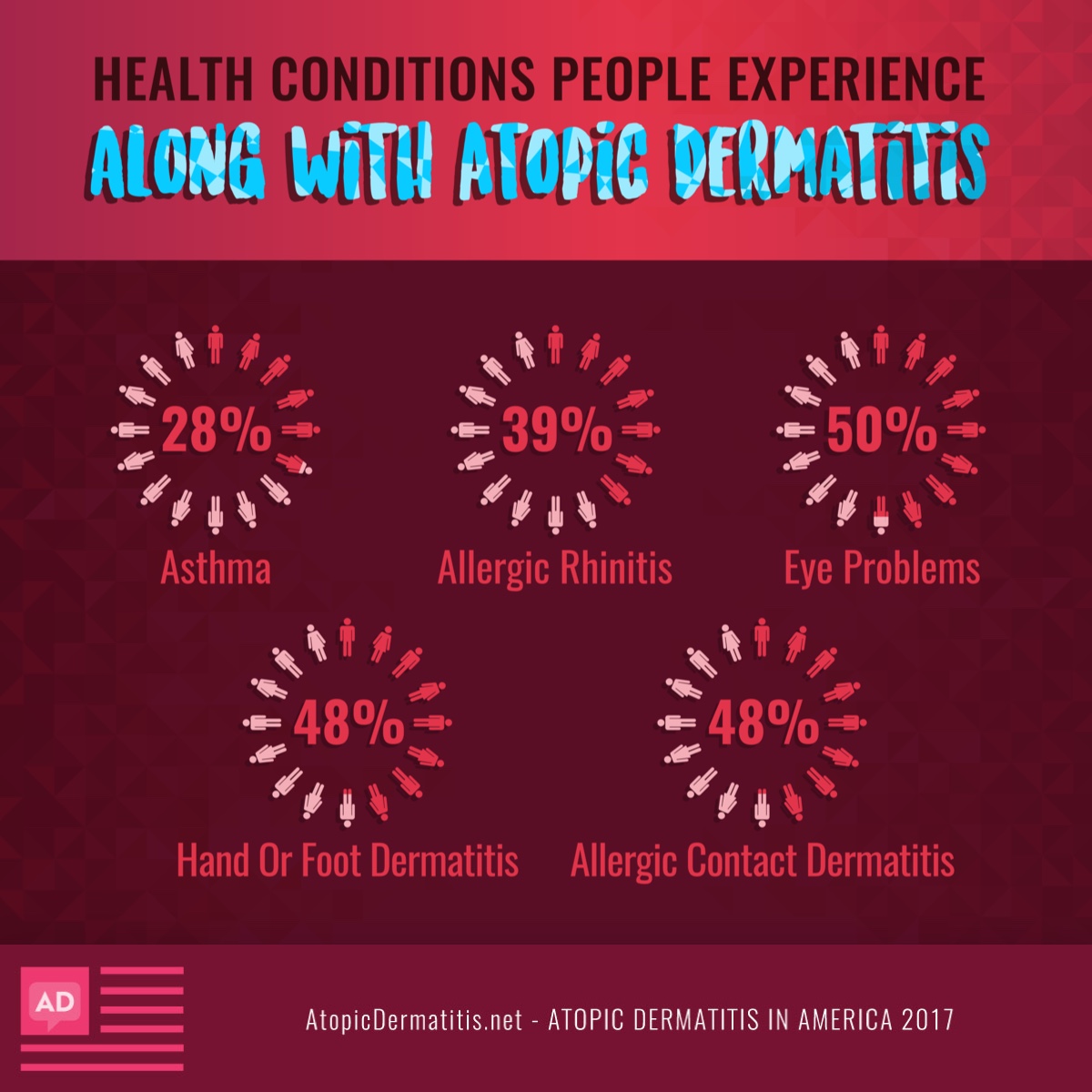 Learning individual triggers can be a challenging journey

Atopic dermatitis can be triggered by a number of factors, and it is important for anyone with atopic dermatitis to work with their healthcare provider to identify their personal triggers and avoid or prevent them whenever possible. 93% of survey respondents have been able to identify their triggers. Triggers are not always environmental in nature, 75% of respondents identified stress and/or anxiety as their most common trigger. 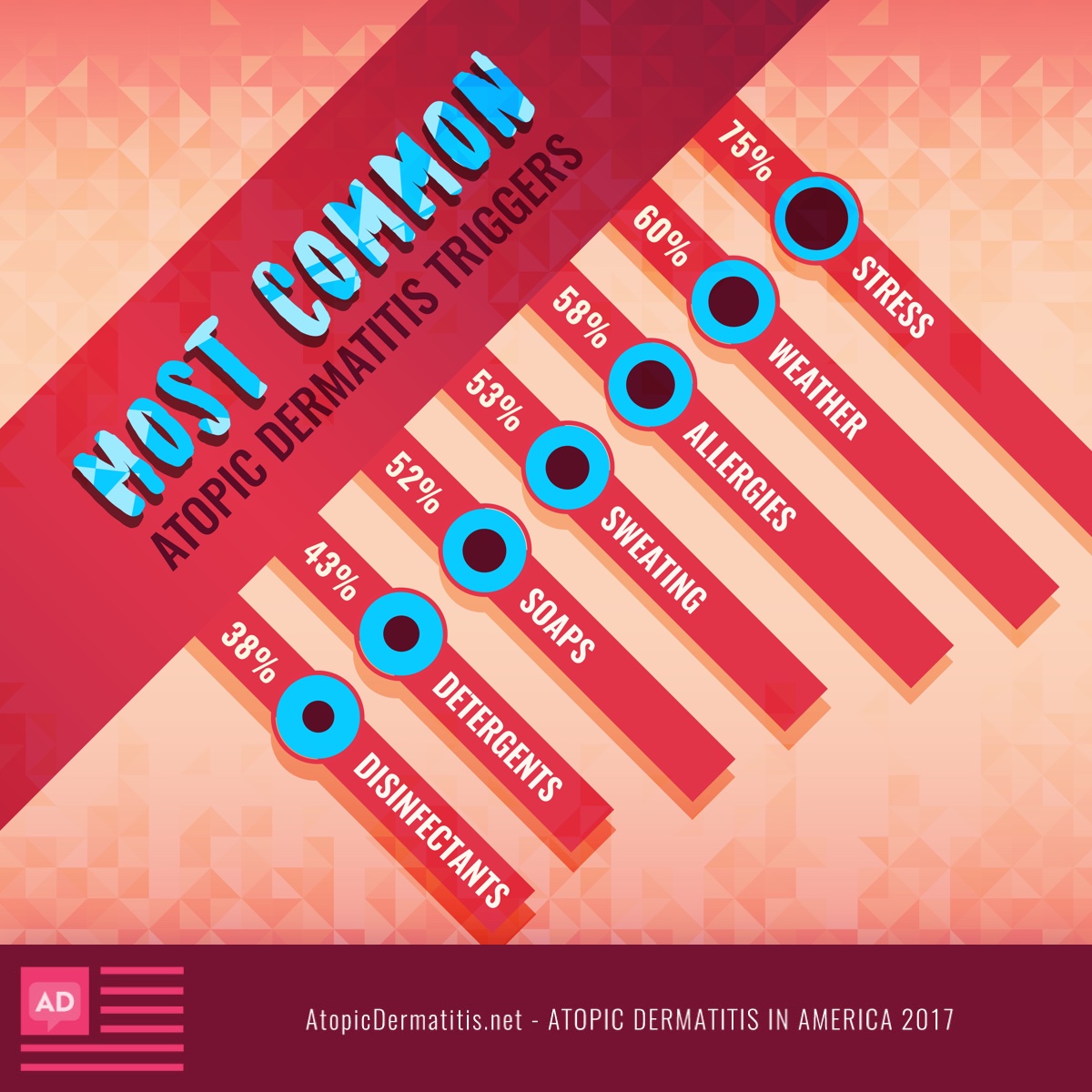 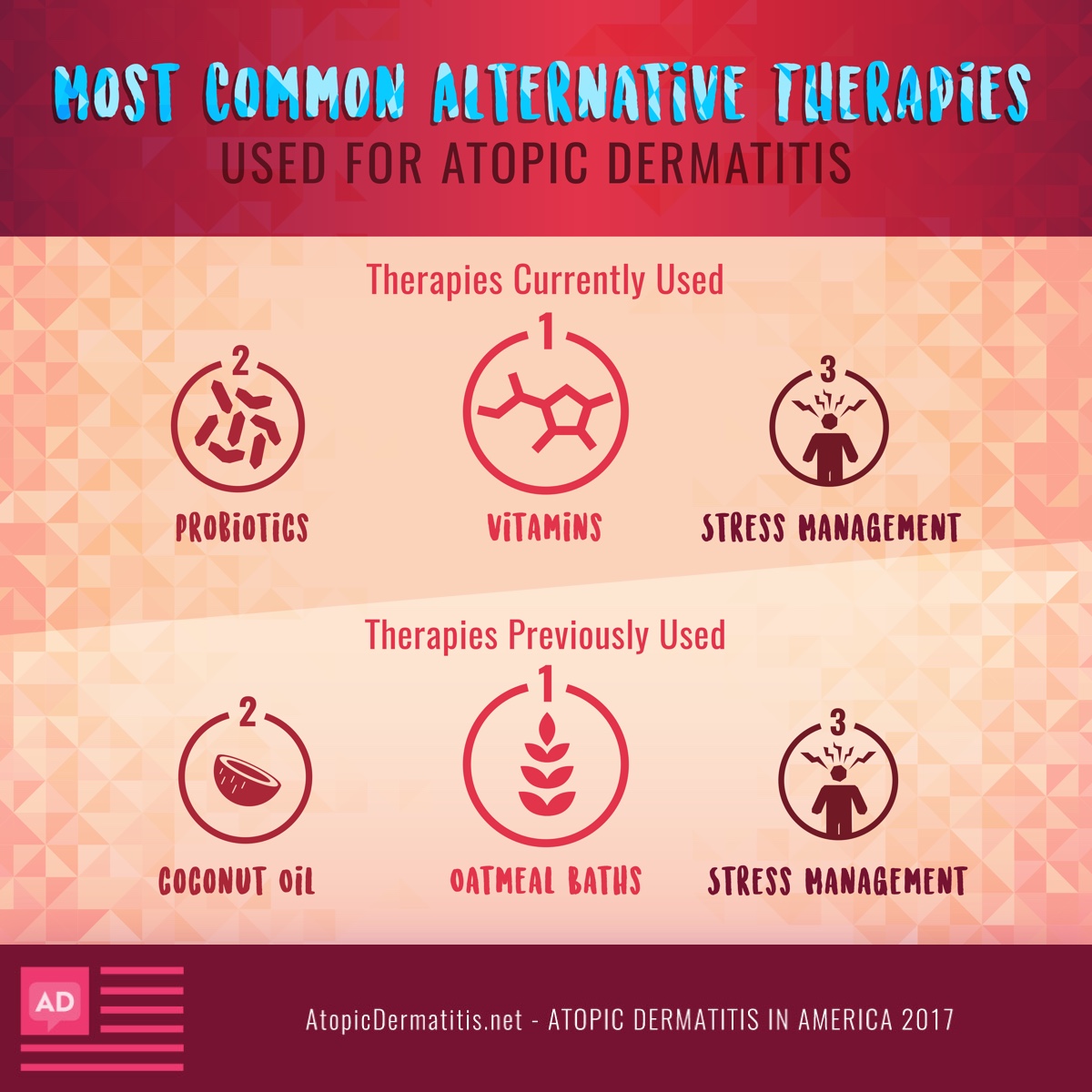 Atopic dermatitis may require trying lots of tactics to minimize the impact that flares can have. 98% of survey respondents have tried various tactics for improving symptoms or managing flares and most continue to use the tactics. The top tactics employed were applying moisturizers or lotion, using special soaps or cleansers, avoiding rubbing or scratching vigorously, changing laundry detergent or fabric softeners, and avoiding perfumes or fragrances in laundry detergent. One survey participant shared "atopic dermatitis is a time-consuming hassle of a disorder. It is insidious in how it affects every aspect of your life - and how you modify everything to minimize your symptoms." 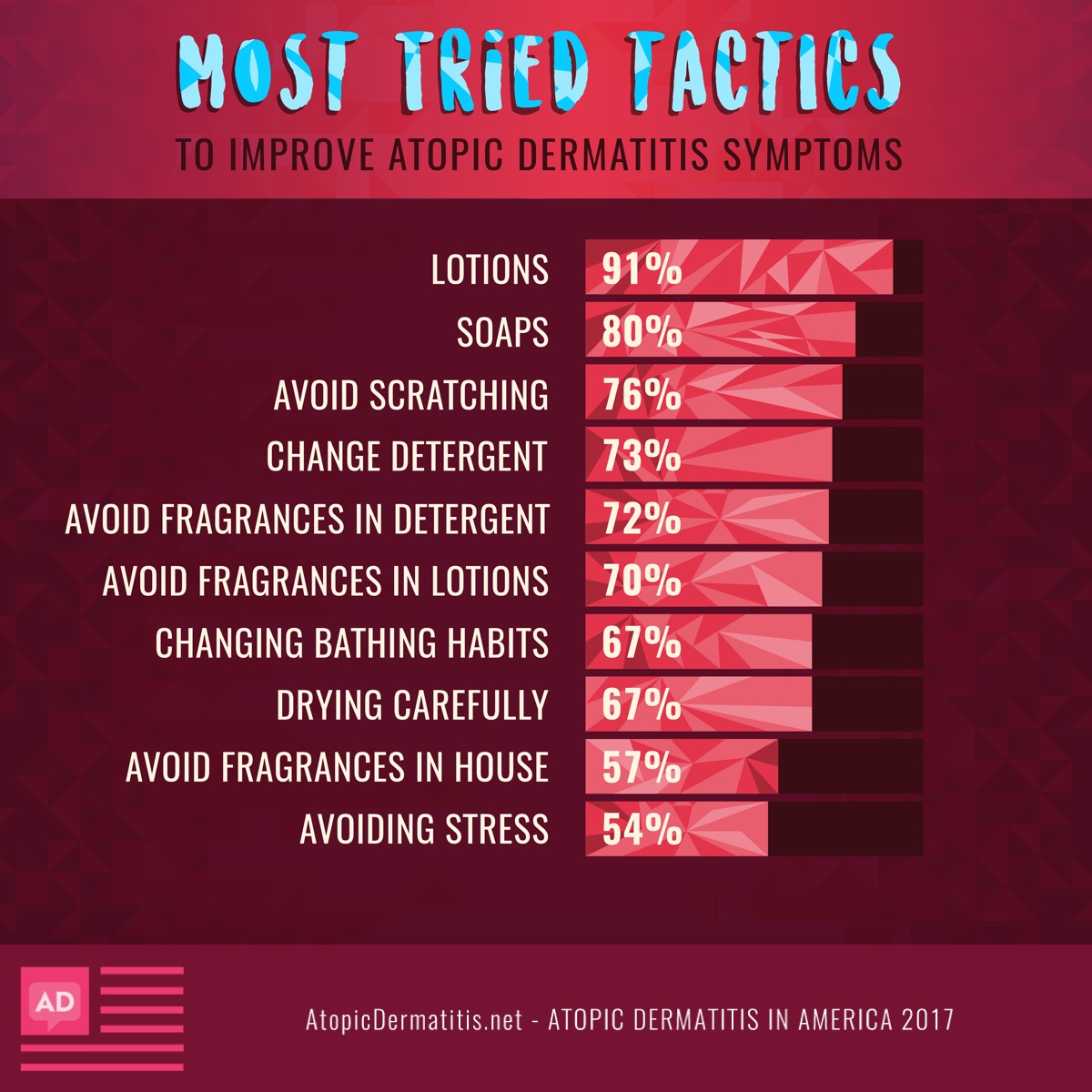 Atopic dermatitis as an animal

When asked to describe their atopic dermatitis, many survey participants chose animals that are considered ferocious like a tiger, alligator, bear or lion. Participants animal choices also reflect the physical experience of living with atopic dermatitis including feelings of painful and prickly skin (porcupine), irritating and annoying symptoms (mosquito) or dry and scaly skin (alligator). 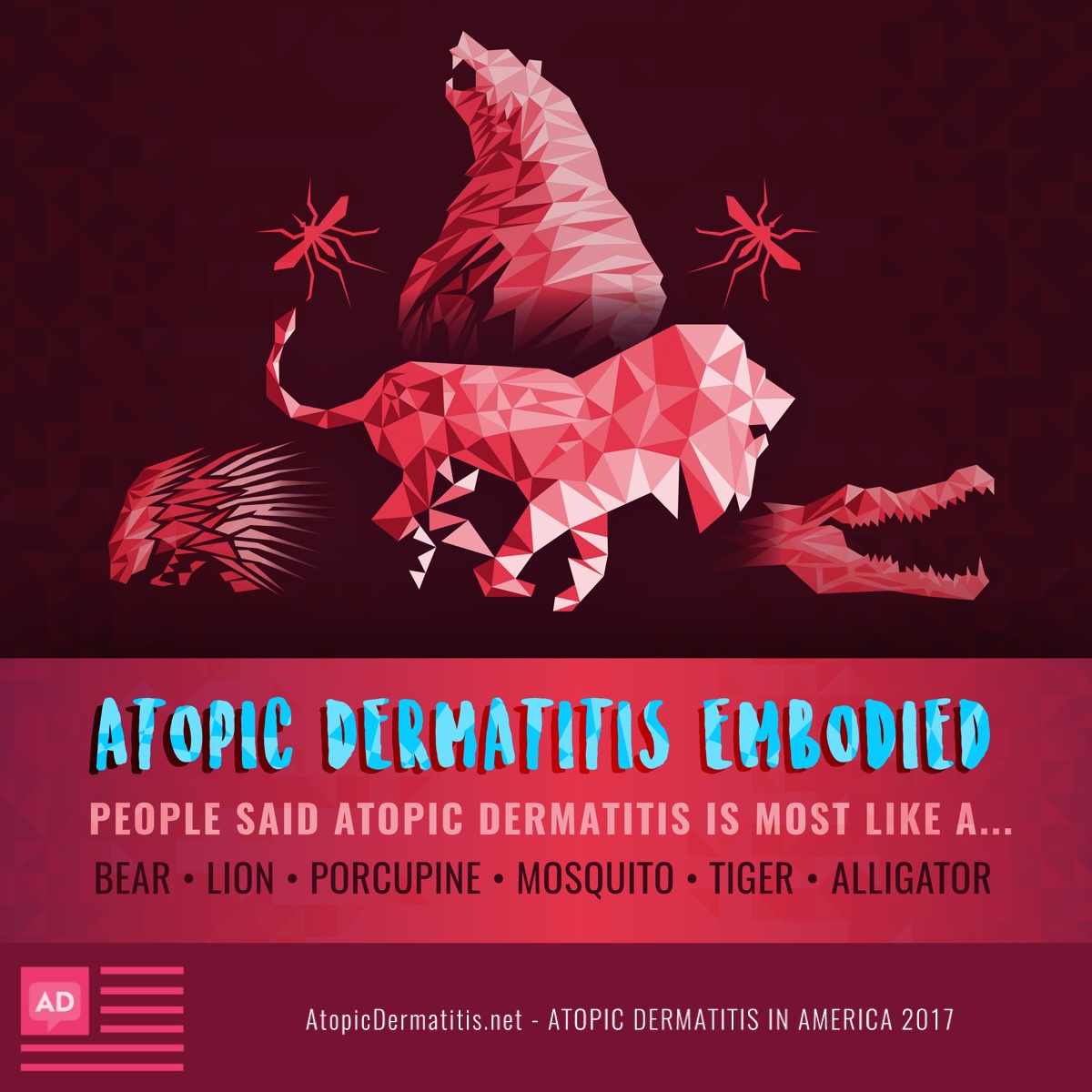 Is Atopic Dermatitis an Autoimmune Disease?

How often do you downplay your eczema to other people?