What is Eczema Herpeticum?

Eczema seems like a huge theme park with many different facets, designs, and displays. There are a million things to conquer, but there isn't a map available. And with that, some areas can be more daunting than others.

Well, if there is a Tower of Terror section, then eczema herpeticum would be it.

What is eczema herpeticum?

I had never heard of such a condition until I entered topical steroid withdrawal, but every eczema patient should know exactly how dangerous it is.

First off, it is a viral infection caused by the herpes simplex-1 virus.1,2 Because our skin is open in many areas, more so than healthy individuals, we are far more susceptible to contracting this virus. So, if you have severe atopic dermatitis, this needs to be on your radar.

How does it show up?

It can literally be everywhere. Most of the time, it's the face and neck, which can be scary. And it's hard to pinpoint when someone contracted the virus since it can take up to two weeks for it to rear its nasty head - and a nasty head does it have!

A few symptoms are clusters of small blisters, usually red and painful. They can ooze if opened and usually spread at a rapid rate. Swollen lymph nodes and fever are other telltale signs of this unbearable virus.

How severe is the infection?

Eczema herpeticum is no ordinary infection. It can go from mild to severe to life-threatening within days if left untreated. You read that correctly: life-threatening. If no treatment is given, it can cause organ failure or loss of sight.

How is it treated?

Antivirals. For a herpes complex viral infection, antivirals, such as acyclovir, are necessary to treat eczema herpeticum. There is no other treatment that will kill the infection.

Kelly Barta, a dear friend of mine who also holds many titles of advocacy for the TSW and eczema community, found this out the hard way.

Kelly, one day, began to feel unwell. She had flu-like symptoms and swollen lymph nodes. It wasn't until a few days later, when bumps began to form and spread, her neck weeping profusely, that she became concerned. 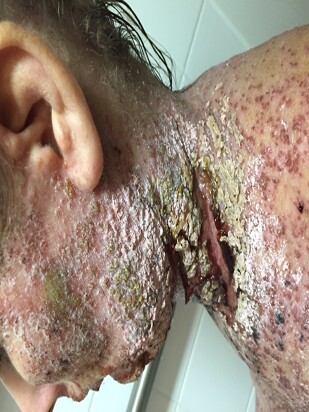 A visit to the ER

She decided it would be best to visit the ER. Sadly, and to her fright, none of the doctors knew what to do for her. They had never seen anything like it. They decided to put her on an IV antibiotic while they waited for a skin culture result.

However, the antibiotics clearly weren't working, and her itch level skyrocketed.

"It felt like I had been flayed alive – all of my nerve endings exposed and open to the elements," Kelly recalls.

They gave her tons of painkillers, nothing coming close to assuaging her pain. It got so bad that her IV wouldn't even stay in her arm.

"It was put into my toes instead," she states.

Putting the pieces together

It was literally day three when Kelly, not the doctors, started to suspect that it was eczema herpeticum. She wouldn't have received the antivirals she needed to survive if it wasn't for her advocacy. Nevertheless, her body was already ravaged by the virus, unsightly, as if from a horror film.

The hospital, realizing her state, allowed her sister to come in and bathe her. 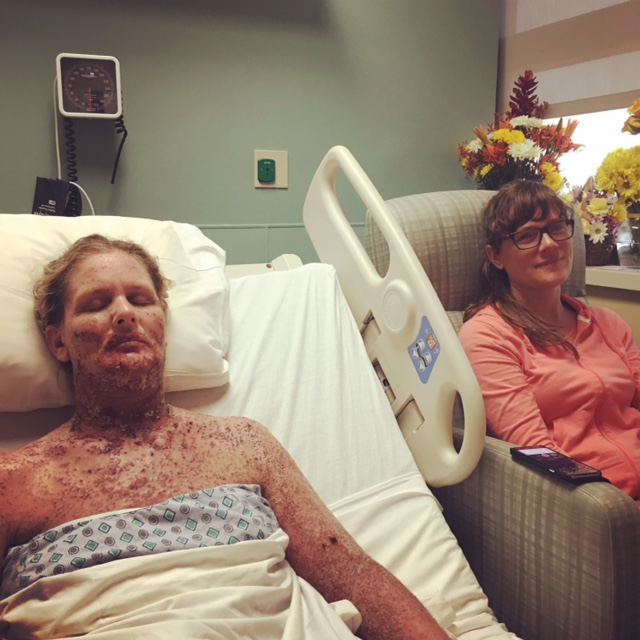 "It was really a scary experience for both of us," Kelly shares "How much tissue should come off of my body? Where was the line between dead and living tissue? What do you leave not to make matters worse? We were both praying and crying and trembling the entire"time."

Her time at the hospital was so bad that she ended up signing a formal complaint. It was the first in her life. The doctors should have recognized her infection much faster than they had. That's the thing - doctors are not well versed in this type of infection. That is why it is unbelievably imperative that we, as eczema sufferers, understand how this virus works.

"I ended up having recurring outbreaks every three weeks for over a year," she divulges "Once I recognized the onset of the virus, I would begin the antivirals right away. Within a few months of experiencing outbreaks, I was genuinely scared about what would happen if my body developed a resistance to the antivirals and they stopped working. I couldn't imagine a worse way to die."

Even though the antivirals are the only treatment for this, Kelly believes that meditation during this excruciating time was what saved her. It helped calm her body and kept her in a trance-like state. CBD oil, as well, helped ease her panic attacks.

If there is anything one can take away from this, it's to know the signs. If you feel unwell, have swollen lymph nodes, and tiny painful dots start showing up on your body, seek medical attention immediately. Ask for antivirals right away and take them as soon as possible. If the infection is already widespread, IV antivirals will be needed.

Take this seriously. Your health, even your life, will be on the line.

Coping with Our Skin

What is Topical Steroid Withdrawal (TSW)?