What Is Atopic Dermatitis (Atopic Eczema)?

Atopic dermatitis is a common skin condition characterized by dry, itchy, and scaly patches. It is commonly referred to as eczema, as well as atopic eczema or just dermatitis.

Atopic dermatitis (AD) is a type of eczema, although there are other forms of eczema that are not classified as AD. From a medical perspective, atopic dermatitis and atopic eczema are interchangeable terms. AD most often occurs in children, with 90% of all cases being diagnosed before the age of 5.1,2

What does dermatitis mean?

Dermatitis is also a general term that describes inflammation in the skin. When it is used by a healthcare provider, it usually will mean that they do not have a specific diagnosis or have not identified the underlying reason for the skin inflammation.

What does atopic mean?

Atopic refers to a group of diseases in which there is often an inherited tendency to develop a hypersensitivity reaction or allergic response, such as asthma or allergic rhinitis (commonly called hay fever).

AD can look different depending on the age of the person. 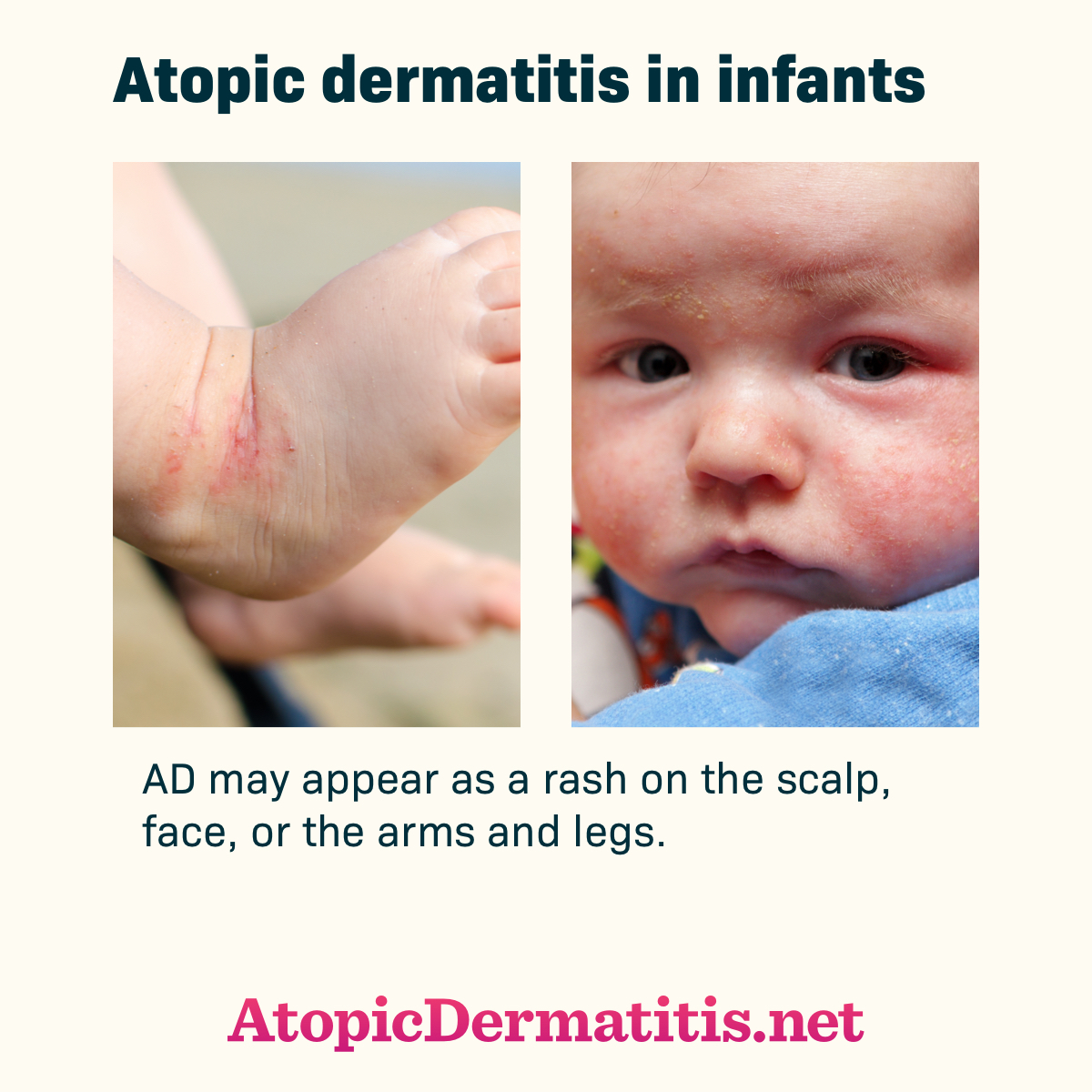 In infants, AD may appear as a rash on the scalp, face, or the extensor surfaces (the outer surfaces) of the arms and legs that makes the skin dry, itchy, and scaly. The rash may also have areas that bubble up and ooze fluid. 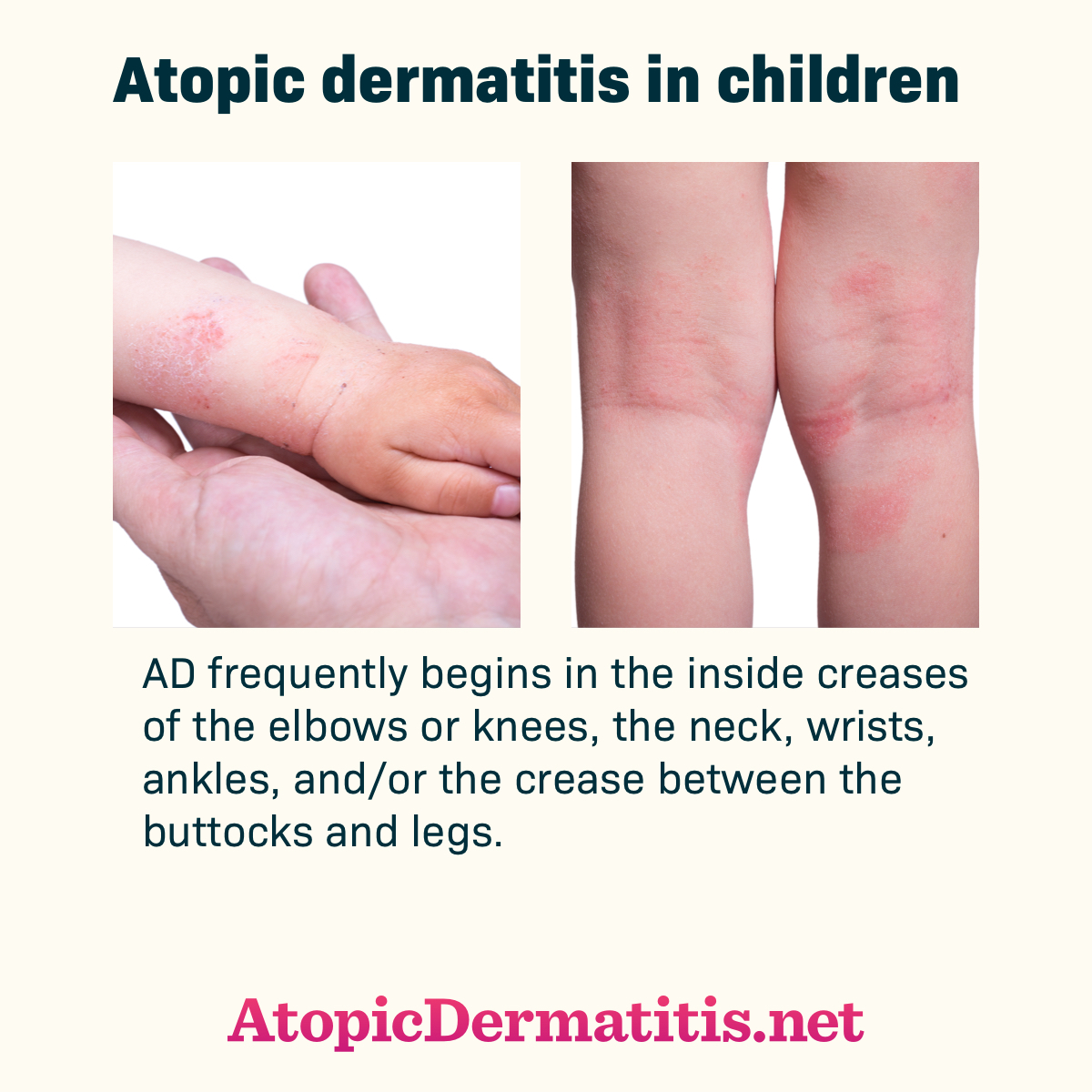 In children, AD frequently begins in the inside creases of the elbows or knees, the neck, wrists, ankles, and/or the crease between the buttocks and legs. The rash is itchy and scaly and may form bumps. The skin may lighten or darken where AD affects the body. 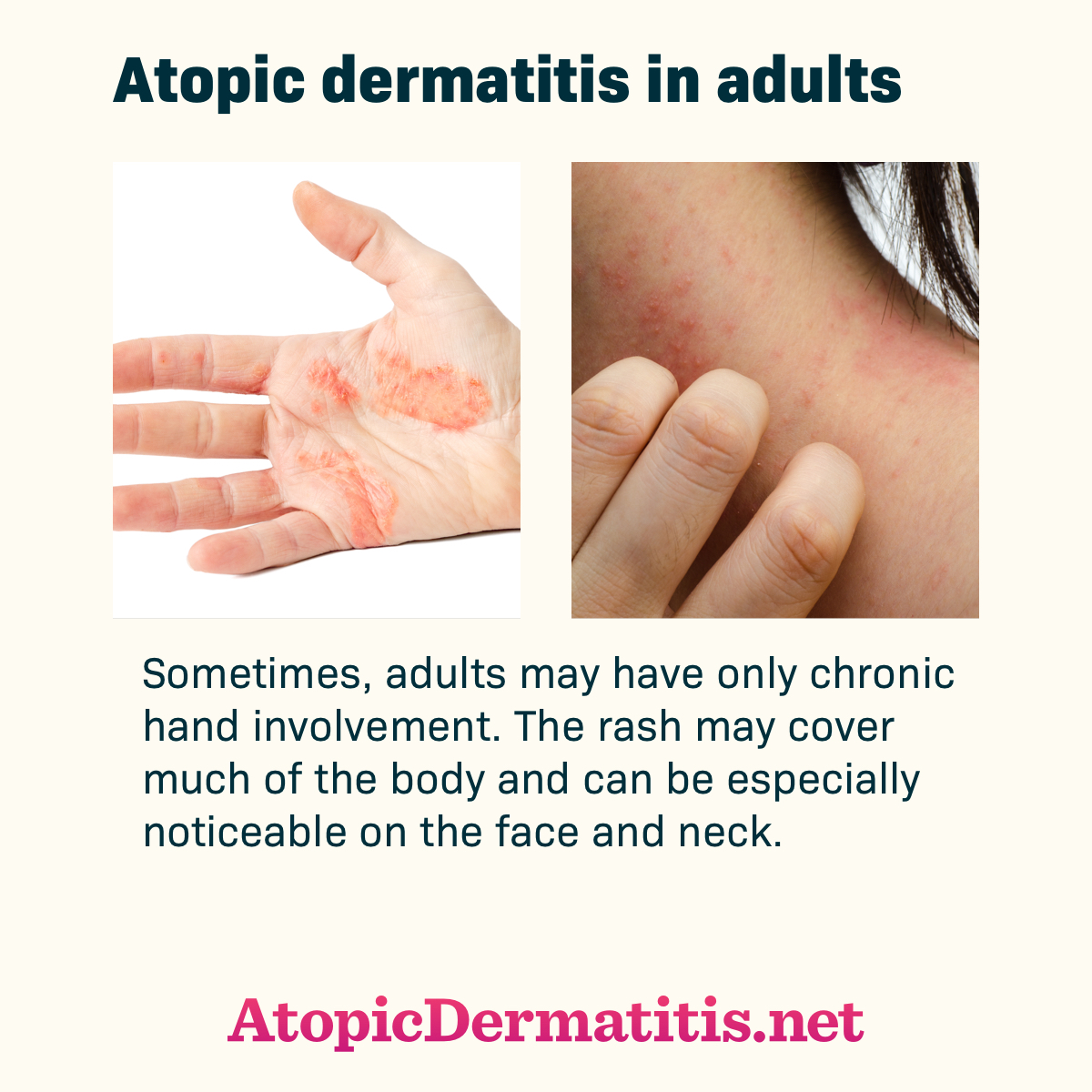 While it is rare for AD to begin in adulthood, it happens in about 5% of cases. Some people who have AD as a child continue to have the condition in adulthood. In adults, AD often shows up in the inner creases of the elbows or knees, wrists and ankles, and/or the nape of the neck. Sometimes, adults may have only chronic hand involvement. The rash may cover much of the body and can be especially noticeable on the face and neck.1-3 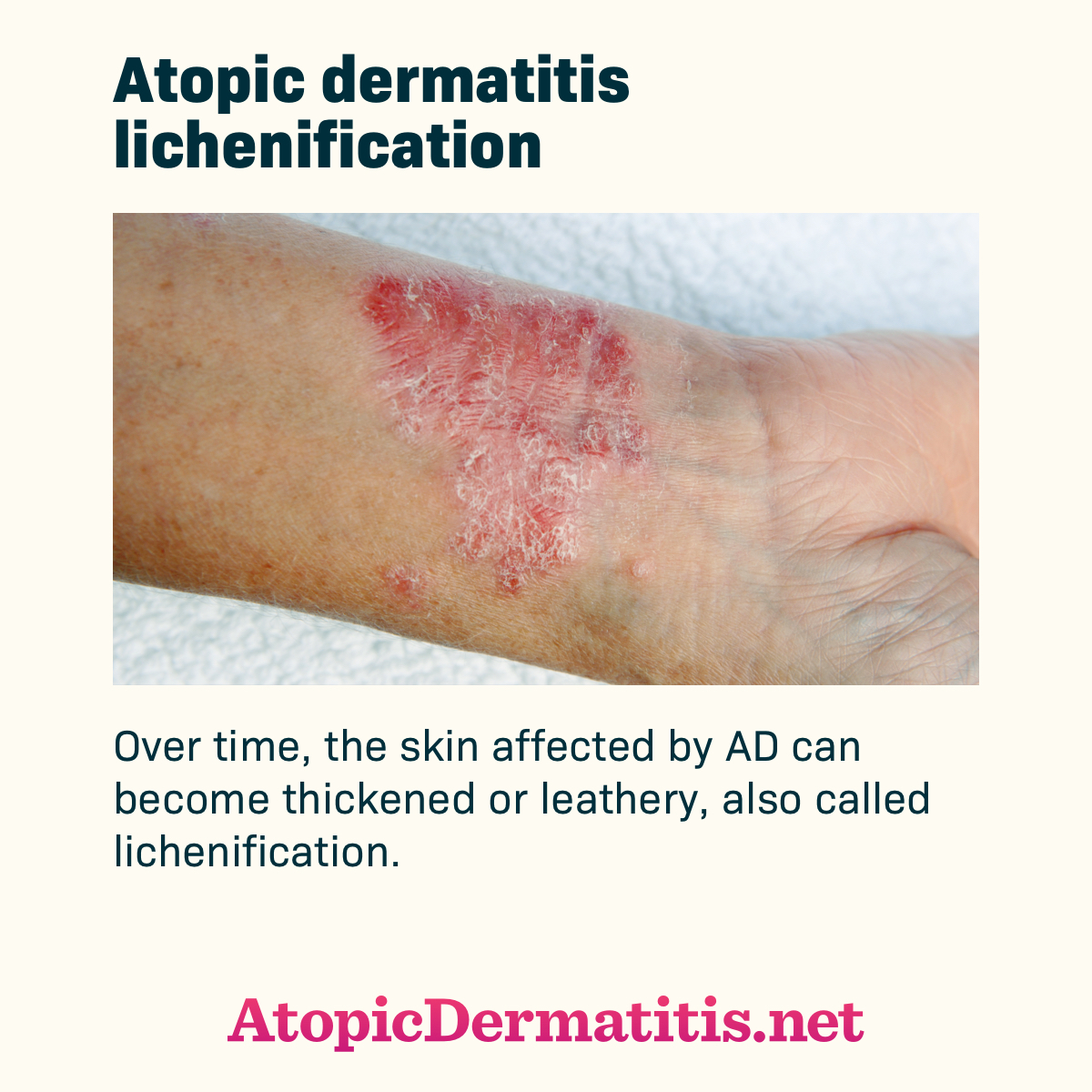 Over time, the skin affected by AD can become thickened or leathery, also called lichenification. Thickened skin may also develop nodules or bumps. The areas of thickened skin are itchy all of the time, and proper treatment is important to reduce the development of chronically itchy, thickened skin patches.1,2

The exact causes of AD remain unknown, although researchers have found that there is a genetic predisposition. Environmental factors, a dysfunction in the immune system, and a dysfunction in the skin’s barrier also play a role. In addition, there are some known risk factors that may put a child at a greater chance of developing the condition including asthma or hay fever (a common allergy), living in a developed country, and having a family history of AD. As a chronic and recurring condition, AD can reappear and has periods of flares or times when symptoms are worse. Common triggers for flares of AD include heat, sweating, emotional stress, infections, and irritants like rough fabrics and winter time, due to the low seasonal humidity. In addition, in some people, a food or environmental allergy can trigger a flare.1-3

How is atopic dermatitis diagnosed?

A primary care physician diagnoses most cases of AD, although some people may be referred to a dermatologist, a physician who specializes in conditions that affect the skin. The doctor inspects the skin and asks about symptoms such as itch. Occasionally, a patch test may be used to determine if the person has skin allergies.2,3

How is atopic dermatitis treated?