Let's Talk About Hair: How I Developed Seborrheic Dermatitis

I first developed seborrheic dermatitis when I was a teenager. Getting relaxers to my hair for a couple of years, I made a mistake and received one in the middle of a mild eczema flare-up. At the time, I only had skin problems on the back of my neck and areas that I could mostly cover. I was used to the routine of flare-ups, and I was very adamant about getting my routine hair touch-up. I decided to get a relaxer touch-up during my mild flare, despite my mother's suggestion against it, and not long after, I began getting dandruff for the first time. My hair would flake so bad that I'd leave traces of my skin from scratching behind on my classroom desk. It was embarrassing, and I did what I usually would do during times of extreme eczema - I went to the dermatologist.

I was diagnosed with seborrheic dermatitis 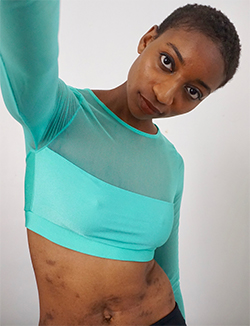 My mother and I were told that I had seborrheic dermatitis for the first time when I was about 15 or 16 years old. I don't remember hearing this condition name at the time. The appointment felt like it was simply another medicine exchange for them to fix my eczema, and I carried on in my life routine.

I started losing my hair

I kept that viewpoint of my scalp eczema for many years that it was just atopic dermatitis on my scalp, and I lost a lot of my hair in the process, each episode being worse than the last. I lost the entire crown and then the top half of my hair twice before 2018 when I had my worst episode yet, and I began losing all of my hair while dealing with seborrheic dermatitis.

I was on the hunt for solutions

As an adult looking back into my files, I saw the seborrheic dermatitis name in my medical records in 2018, right before learning of my topical steroid withdrawal awakening. I began to find solutions specifically for this type of dermatitis or eczema.

I did what I normally would do: get a steroid-based shampoo. The shampoo gave the results I was looking for, relief from the burning and flaking scalp. Because I was also flaring badly throughout my entire body and saw how bad my skin could truly get without the proper high dosage of steroid creams, I went on a mission to learn all I could about eczema. I researched every single type of eczema, and seborrheic dermatitis was one of them.

I didn't want a temporary fix

As many may know, steroid treatment for any skin condition is simply a bandaid fix. In many cases, it will give immediate relief, but it will only last temporarily until more is needed or a higher dosage is prescribed. Why? Because steroids do not get to the root cause of the problem. Other solutions must come in - solutions that are often natural and take a little more time and consistency to heal.

The last doctor I saw about my seborrheic dermatitis told me that he had it too and that steroids would not heal the issue. You have to kill the fungus. This extra hint changed my entire trajectory of knowledge about eczema.

It is very typical for me not to have scalp dermatitis for many years once I use steroid-based shampoo, but I am currently at my longest run without any sign of it as an issue in 3 years. I finally feel like I have my scalp and hair back with the ability to flourish.

I needed to learn more about this condition

In February/March of 2018, I was still impatient and ignorant of the process of healing. I did what I always do, and I received the same medication to help my scalp. Now that I specifically knew that I had seborrheic dermatitis, I researched it for myself and became very informed about the disease and why it happens.

How I found relief

In the second portion of this topic, I will give the specific details of what I used, why, and how so that you too can start or expand your research and knowledge of this very complex condition. A condition that I consider to need the opposite of atopic dermatitis skincare routine. Simply put, seborrheic dermatitis is a fungus-based disease that needs anti-fungal products and less moisture-based healing. Not putting moisture on a dry scalp can seem counterintuitive, but trust me, this is how I healed!

Do you have any form of scalp eczema or uncontrollable dandruff? Share in the comments your journey.

How I Kept My Baby from Scratching His Itchy Head