A Journey to NMT (No Moisture Treatment)

In the realm of topical steroid withdrawal and those seeking to scrap their steroid creams, there is a treatment that usually leaves people concretely on one side of the proverbial fence. They either find it absolutely crazy, or they swear by it.

It's called NMT, or no moisture treatment.

Who is Dr. Kenji Sato?

I get a bit excited over this topic since I was actually able to meet the doctor who coined this phrase, Dr. Kenji Sato. While filming my documentary on TSW, I flew out to Osaka, Japan, to meet the man who has the one and only facility that houses TSW patients. He can care for them throughout the day, especially because he prefers his own treatment method.

NMT entails some of the following...

Must I do NMT to heal?

No, this is only one of many different treatment options you may take towards healing. But, many people truly feel this speeds up the healing process.

One such person is Jordan Hendey.

I discovered Jordan through a friend of mine. My messenger went off, and my friend had sent me a Tik Tok video that went absolutely viral all the way from Australia.

There Jordan was, sharing his journey into TSW and how he was going through the no moisture treatment.

Soon, Jordan joined the Instagram family (ctrl.skin), posting little videos explaining his process and how he is doing. He is such a natural in front of the camera and has such a calming presence. So I slid into his DMs, as you do, and asked if he'd be willing to chat.

With open enthusiasm, he jumped at the opportunity to spread more awareness.

Hailing all the way from down under, Jordan remembers dealing with eczema ever since he was very little, even the tiny gloves that would dress his hands. 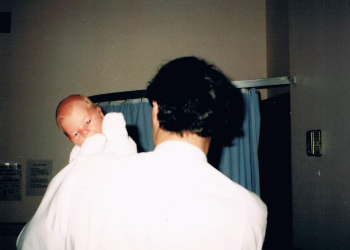 It started to spread more and more into his teen years, especially with his steroid use.

"Use the steroids until the eczema is gone, plus fourteen days after," he recalls of his doctor's instructions.

So, he continued with his doctor's advice, but it was everywhere by the time he was 20.

He started doing his own research on his skin, unable to rely on his doctor's words alone fully. He found the nonprofit ITSAN through his detective work and soon realized that he may not be dealing with severe eczema at all but topical steroid withdrawal.

Because of this revelation, he quit steroids cold turkey around Christmas 2015.

A few months later, trudging through TSW, Jordan found himself in the hospital with two blood infections (staph and strep). They placed him on IV antibiotics and told him that he needed to get his skin barrier back together.

"They babied me," he shares, shaking his head, describing how one doctor tried explaining how his skin was on fire and that it needed a fire engine truck to hose it down.

And guess what the hose had in it...steroids.

All the doctors who rotated in and out of his room, especially since he seemed to be such a strange case, kept insisting that he use steroids because TSW was not real. "I just had a bad flare-up," he says, restating their argument.

He could see how this was wearing on the people around him, so he went back onto the steroid creams.

Between 2016 and now, Jordan fought off many demons. He tried weaning off the steroids for about two years, getting to only an over-the-counter steroid product, but alas, he still needed the stronger meds. It weighed so heavily on his conscious and spirit, even suicidal thoughts barged in.

However, within the saddening chaos, Jordan found a glimpse of hope.

"Through my research, I stumbled upon NMT," he explains, attesting that a podcast, as well as Dr. Sato's assistant's site (Tokuko) and Healingtsw.com, helped him start his NMT journey.

No moisture treatment seems to have a much faster healing time frame than using moisture, which allowed Jordan to feel more confident in his choice.

"I have a doctor I see every week who checks on me and my progress," he affirms, since it is highly dangerous to go without medical support while doing NMT.

He is also super grateful for his partner, who does so much for him. She even helps him bathe. "It wouldn't be possible to do this without her."

Although Jordan's NMT journey is still fresh, it will be exciting to see how he progresses each month. He is passionate about sharing his experience every step of the way. And once he shared his background in film and digital marketing, it gave me hope that, one day, we will have even more documentary footage showcasing the severe need for reform in the field of dermatology and steroid use. 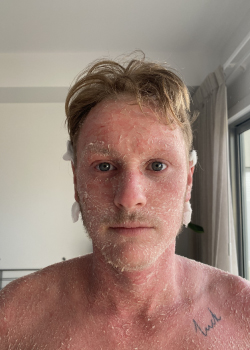 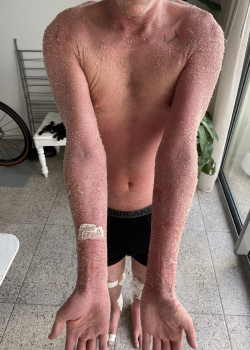 Take the In America survey

If you’d like to help shed light on the realities of life with atopic dermatitis, take our most recent survey. About 10 percent of people in the U.S. have some form of atopic dermatitis. Every voice counts.

Scary Shower Syndrome: Tips and Tricks for a Better Shower