The Power of Unveiling Eczema

Like many of us, the relationship with our mirror is a tricky one. I cringe in the morning, awaiting what inflamed or irritated skin will greet me in my reflection. It's a rigorous battle, one a lot of eczema patients try to hide.

You see, with eczema, it's in your face (or on it, literally). People can see it and tend to comment on it or stare - one or the other. It can be trying when there is no way of escaping the world and its need to assess your chronic illness.

"Have you tried coconut oil?" 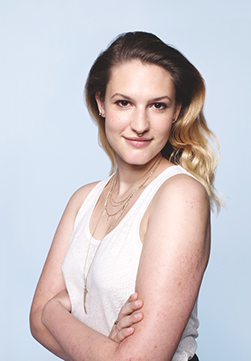 I'm sure you've heard that one before! So has Alexis Smith, a 25-year-old eczema advocate.

How did I find her?

I found her years ago while scouring Instagram. She has been such a voice for the eczema community, even receiving the honor of representing eczema-prone skin in Dove's DermaSeries campaign in 2018.

What I find so admirable in Alexis is her ability to cheer people up with her vulnerable posts, freely showing off her eczema spots. Her face, much like my own, is a problem area. Yet, do we have to always see it as such - a problem?

The power of makeup 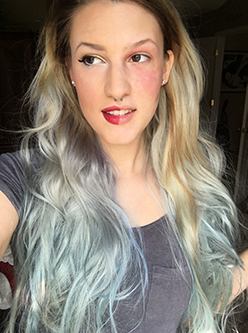 Back in 2016, a trend began where individuals would only doll up half of their face, leaving the other half au naturel. It was creative, allowing people to showcase their natural state; it was like lowering the veil, slowly, of what was hidden underneath the layers of foundation, rouge, and eyeshadow.

A half-face with makeup

"For most people," Alexis began, "it just showed how makeup could make them look drastically different compared to their bare face. I hadn't seen anyone with a skin condition do it, and I figured it would be a good idea to show people what my skin really looked like underneath all of the makeup I would wear. I would never really show my bare face with visible flares."

She posted her own half-face makeover onto her personal Instagram account, not thinking it would be received with such enthusiasm. To her surprise, she was shown empathy and love.

"I got a lot of positive feedback, which was refreshing to see after being so nervous about putting my skin on display like that."

Instead of leaving the photo as a simple post, Alexis took it a step further. She opened a new account where she would display her eczema proudly - @eczemalove.

"It was a good way to put it out publicly so everyone could see what eczema actually looks like, and I figured it might be cool for other people living with eczema to see this picture and be able to relate to it and, hopefully, feel less alone," Alexis divulged.

Many have since created their own eczema accounts, including me. It is a way to engage with the beautiful souls around us.

"Creating my Instagram account has been so amazing. It's given me so many opportunities, and I've been able to connect with so many people around the world."

A new perspective on makeup

Before her advocacy began, using makeup was an attempt to hide her facial eczema. She would try different hacks, even piling on green concealer to help mask her redness. Alexis loved using makeup, in general, yet it would only make her skin more irritated. It was a Catch-22 most days - never allowing her to truly enjoy her makeup while also not doing a fine enough job at shrouding her eczema.

But now, her perspective has shifted with makeup.

"I would say we're on good terms now. It was that love/hate relationship for a while," she expressed, "but now I've figured out how to incorporate it when I want to without ever covering up my red patches. The goal of wearing makeup now is never to hide things but just to have fun with makeup in general. I love doing artsy looks!" And some of her looks are so cool!

The burden of living with eczema 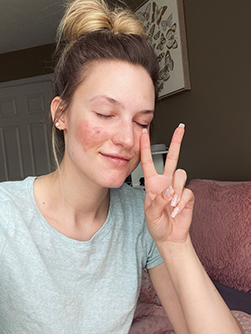 It is still difficult to have a comfortable relationship with my skin. It's a rollercoaster, some days better than others. But Alexis, with her wise eczema confidence, assured me that eczema does not define us.

It's draining to focus on what others think

"You can’t control the physical effects of eczema, but you do have control over how you feel about yourself. I was so miserable before. You don't really realize how mentally draining it can be to always be so focused on how you look and how other people think of you."

It is so exhausting.

"To tell you the truth," Alexis continued, "whenever we think to ourselves 'that person looked at me. They probably think I look so ugly with this rash,' you're really just projecting your own thoughts about yourself onto people who are not thinking anything remotely close to that. I promise you other people are more worried about their own personal insecurities to even notice yours. Once I realized having eczema does not make you ugly, it really changed my whole perspective, and I'm a lot kinder to myself now."

If we can all adopt Alexis' way of thinking, I think we can conquer the world!

Coping with Our Skin

The Emotional Cost of Eczema